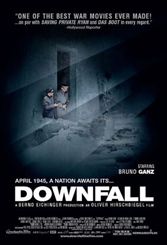 Oliver Hirschbiegel’s movie is a mesmerizing re-enactment of Hitler’s last six days in hiding as the Russian army takes Berlin and the heinousness dream of the Third Reich literally collapses around him. Bruno Ganz as a shrunken, etiolated Hitler who careens from tender concern about his young secretary to maniacal rants against his generals is utterly convincing; the movie is worth watching for his performance alone.

Most of the film’s scenes take place in an underground bunker and with depressing lighting and little use of music, the net effect is claustrophobic. Downfall is told loosely from the perspective of Hitler’s young secretary, Traudl Junge (Alexandra Maria Lara), and indeed it’s the portrayal of the ordinary people who are closest to Hitler that make this film so fascinating to watch.

From the Magda Goebbels (wife of Hitler’s second-in-command) who efficiently poisons her six children because she can’t conceive of them being raised in a world without National Socialism to Junge, with her youthful — and later, self-unpardonable — curiosity to witness power up-close, every character brings his or her own nightmarish enactment.

After the film comes a short clip from an interview with the real-life Trandl Junge, a few years before she died of old age. She explains that for many years she consoled herself over her support of Hitler with the excuse that she was young and knew nothing about the mass murders of the Jews. Then one day she happened to come across a memorial to Sophie Scholl, the young woman put to death for resisting Nazi propaganda. Junge saw they were both born the same year and no longer was able to blame her choices on youth.