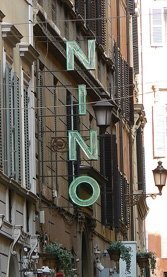 ino is a funny place. It’s been a Piazza di Spagna bastion since the Mussolini era. In the 1950s and 60s it attracted a fashionable clientele including the Rome elite.

The Tuscan-oriented food was good, the locale glorious (two blocks from the steps), and the tables in close enough proximity to advertise Rome’s show-offy side.

You’d think they might have waved the white flags, as many other centro storico counterparts did. But no, Nino plowed ahead. They agreed to serve primarily tourists but didn’t sacrifice quality.

Working backwards, a recent trip yielded an exquisitely light and tasteful tiramisu, with none of the industrial weight that dessert has acquired in recent years. Strawberries were fresh.

Fettucini con tartufi neri was aromatic and delicious, the waiters (the same crew for decades) careful to note that white truffles weren’t in season. Orata (bream) was white crisp, clean and delicate (with house white). The carpaccio with rugetta and parmesan slivers had the melt-in-your mouth quality that’s hard to come by. Old mainstay zuppa dei porcini, mushroom soup, is liquid relief when the temperature drops. In fact, it’s hard to find a pasta or meat course that doesn’t qualify as… and here comes the dreaded D-word: dependable. With Rome cuisine in flux, and the centro storico deprived of strong, old-school menus, it’s a strong recommendation.

Go early and you get the visitors. Start later — 9 p.m. say — and you’re more likely to close down the place amid beautiful people. Caveat emptor: Nino is loud — this is no place for sweet nothings, lest they’re lost in the hubbub.

Don’t you dare show up in shorts or tank top. They won’t let you in, bless them.