Denying History: Who Says the Holocaust Never Happened and Why Do They Say It? 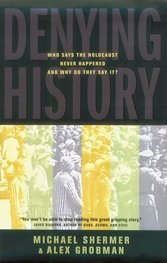 By Michael Shermer and Alex Grobman

What can be more infuriating than a Holocaust denier? What does anyone have to gain by denying the murder of millions? Why bother writing a book about these lunatics at all? Shermer and Grobman offer a meticulous autopsy of the problem, explaining what we mean by the term “history” and how that differs from “pseudo-history.” Reliable history rests on what they call a “convergence of evidence” — if, say, four independent lines of evidence converge on a single conclusion, there’s good reason to believe a particular event actually happened. In the denier’s mind, the entire edifice of history and all its myriad convergences of evidence can be conveniently toppled by harping on a single inconsistency in the theory.

Often a denier will point out that Hitler never issued a direct order to murder six million Jews (or more, if he hadn’t lost the war), thereby “proving” that the Holocaust could not have happened — or, at least, that Hitler was not its principal ideologue. This is a bit like saying that no planes hit the World Trade Center on Sept. 11, 2001 because, if they had, there would have been a wrecked jet or two among the rubble. The first-hand testimony of thousands of victims, the admissions of guilt of the crimes’ perpetrators, the voluminous archives of documents, photographs, transcriptions, train schedules, mass graves, gas chambers and the decimation of European Jewry itself would be enough to convince most sane people that what we call the Holocaust indeed happened.

Importantly, the term “Holocaust” refers not to a single event in time, but to a confluence of events over a period of time; not to any written command, but to a series of stepped-up measures over the years — propaganda, social restrictions, intimidation, organized violence, ghettoization, deportation, etc… which culminated in the deliberate murder of between five and six million Jews. To deny this is to deny history.

Through interviews with the principal deniers themselves and a systematic refutation of their claims, Shermer and Grobman have written an invaluable book. Far from being simply a bunch of losers on the sidelines of history (most of them certainly are that as well), Holocaust-deniers represent an insidious political movement with a most wicked eye on the prize.