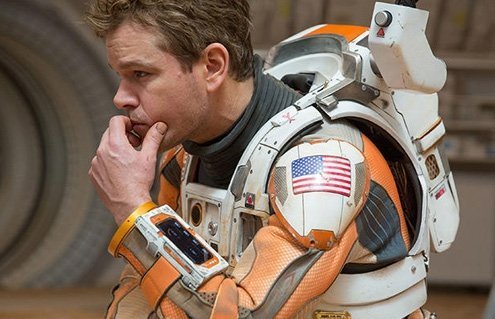 The Martian at its best is the best of Matt Damon.
D

uring a successful manned mission to Mars, part of NASA’s Ares program, astronaut and botanist Mark Watney (Matt Damon) is trapped in a ferocious sandstorm and left for dead by his able but overwhelmed crew. Alone on the planet and out of touch with both the earthbound crew and earth itself, his obvious (if implausible) goal is to try to stay alive long enough to await Ares IV, the next manned mission, which he knows is due in four years time. As he’ll say later, “This is space. It does not cooperate.”

But daunting Mars faces a tough customer in Watney. He’s dogged, ingenious and unflappable, a plucky Dennis the Menace-cum-Boy Scout with a winningly mischievous all-American grin. He makes do and then some, using human manure to grow his own potatoes while boyishly suffering through the only music he has, the departed commander’s vintage disco collection (credit Gloria Gaynor’s “I Will Survive” with an amiable assist). Re-cycled parts and detritus from old probes become his bread and butter and he tries reestablishing contact with earth.

This large chunk of Ridley Scott’s latest space epic, “The Martian” — details of a year in the life of a stranded man — is by far its most gratifying, thanks to Damon’s confident presence and his deadpan manipulation of wry humor. It’s a riff on “Robinson Crusoe on Mars,” an early marooned-on-Mars project, but with optimism and humor to spare, since Watney fights reversals and solitude with ample doses of Midwestern good cheer (“They say once you grow crops somewhere, you have officially colonized it. So, technically, I colonized Mars. In your face, Neil Armstrong!”)

So far, so good: In fact, Watney seems well on his way to mastering an against-the-odds story that might stand up on its own — until Scott turns over the proceedings over to the unsurprising details regained contact and elaborate rescue, expanding the ingenuity to a host of well-drawn, save-the-day NASA characters who, while ready, willing and able, can’t match the 100-minutes of Mars time. That’s because at its core this a film about the human spirit, the will to survive, and the non-dreamy, anti-instant gratification pragmatism (and stubbornness) necessary to pull that off in an environment uninterested in human entitlement.

Though masterfully handled (this is still space nut Ridley Scott), everything about the “get him home” side is pure Hollywood, complicit Industrial Light & Magic with landscapes courtesy of Jordan and Canada. Only an inspirational conclusion will do.

To his credit, Scott dodges the maudlin, keeping the meat of his story and his cast in the problem-solving vein of Rob Reiner’s “Apollo 13,” the aborted 1970 moon mission story that is perhaps the best fictional account of the hazards of space travel. Scott is an optimist about human intentions, about hope, and about how space travel can (and perhaps still should) inspire people toward in a common goal.

Damon’s Watney is a start-to-finish delight, and incidental characters such as Bruce Ng (Benedict Wong), the Jet Propulsion Lab director must patch together a Mars CARE package, and Rich Purnell (Donald Glover), who stumbles on an alternative plan, dish up heaping amounts of yes-can-do spirit. All in all, this is top-notch Hollywood by an Englishman who has long understood how to make smart and visually provocative cinema, and who after several arguably dubious asides (“Prometheus,” his tedious “Alien” prequel, “The Counselor,” an overwrought drug cartel musing, and “Exodus: Gods and Kings,” a biblical misfire) puts a new and vintage notch on his belt. Based on Andy Weir’s 2011 novel of the same name, with images from NASA’s “Curiosity” rover helping to inform the landscape.