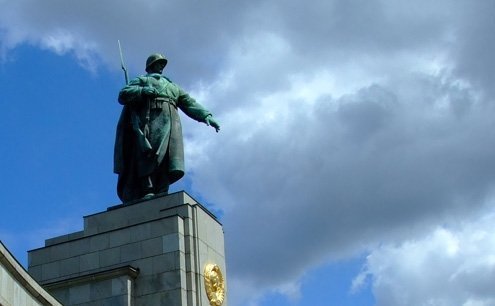 The Red Army monument in the Tiergarten Park: Monuments are born with intent.
G

erman is a notoriously difficult language with labyrinthine sentences and confusing grammatical cases. As Mark Twain pointed out: “Some German words are so long that they have a perspective.”

But Twain was on to something. One of German’s most attractive features is the compound words whose wholes express more than their parts. Think of “Weltschmertz” (literally “world” + “sick”) or Zeitgeist (“time” + “spirit”).

During a recent visit to Berlin, the beauty of one of these compound words particularly struck me: “Denkmal.”

Denkmal is formed from the verb to think — “denken” — and “mal” — or “time.” This is “time” in the sense of a moment of doing something such as “bedtime” or “wartime” rather than chronological or historical time (“Zeit”).

The standard translation for Denkmal is “monument” or “memorial.” But a Denkmal is both different and more. Monuments are planned and built; they are born with intent. Monuments celebrate and glorify. Memorials mourn.

While a Denkmal is a physical object — whether monument or memorial — it has no intrinsic meaning. “Thinking time” is neutral and it is left to the viewer/thinker decide whether to celebrate or mourn. A Denkmal’s thinking time is like a fertile land where seeds of thought take root. Denkmal-inspired thoughts follow the thinker and grow endlessly into the future.

The Communists of East Berlin were fixated on monuments. The Soviets immediately destroyed Hitler’s grandiose chancellery, the headquarters of the SS and the Gestapo. The Soviets had barely raised the flag on the Reichstag before staking out territory in the Allied sector with a Red Army monument in the Tiergarten Park. They bulldozed boulevards designed for cavalcades of tanks through the 1945 rubble. East Berlin’s huge television tower near Alexanderplatz was an unsubtle-if false-glorification of the worker’s paradise.

The East Germans’ lack of sensitivity to Denkmal and love of the grandiose caught up with them. Many monumental Communist party buildings were destroyed after unification because they were crumbling or filled with asbestos. After they had knocked down Denkmal connecting to their city’s more human past, East Germans rebuilt Disneyesque replicas of the destroyed, medieval city to commemorate Berlin’s 750th anniversary in the 1980s.

The West was more attuned to the Denkmal style. Next to Hermann Goering’s Luftwaffe building — but on the other side of the wall — an empty lot and the excavated foundations of the Gestapo and SS headquarters became the “Topography of Terror” Denkmal. Western Berliners fought against razing the heavily damaged Kaiser Wilhelm church. All through the Cold War the church’s jagged silhouette inspired “thinking time” about reconciliation and how wrong grandiosity-first Kaiser Wilhelm’s and then Hitler’s-can go.

Seeing Berlin landmarks as Denkmal broadens their lessons. Take the Luftwaffe building: its efficient completion in a record 18 months (to impress visitors to the 1936 Olympics) was one of those arguments for the “good” side of Nazism, which harnessed German efficiency and put men to work. During restoration as the post-unification German finance ministry, the building’s construction was discovered to be so shoddy it had to be virtually rebuilt.

There are new Denkmal too. Bernauerstrasse, famous from 1961 pictures of people jumping out of west-facing windows before they are sealed up, is a Denkmal to the wall. Thousands of Denkmal displayed in the Jewish Museum restore the past to nurture a fledgling German Jewish future. The Holocaust memorial’s tomb-like blocks are a “thinking time” that create here and now disorientation and fear.

I first visited Berlin in November 1990, when transit lines severed in 1961 had not been re-knitted. The Warsaw pact disliked streetlights and East Berlin’s dark contrasted with the West’s lights. Deserted watch towers snarled over anyone crossing Potsdamer Platz, which was a windswept, weedy lot bisected by the wall’s sand “death strip”-designed to show traces of attempted wall crossings.

Berlin is like the epitaph of Christopher Wren in his masterwork, London’s St. Paul’s cathedral: “If you seek a monument, look about you.”

Once again Twain said it best: “I don’t believe there is anything in the whole earth that you can’t learn in Berlin except the German language.”