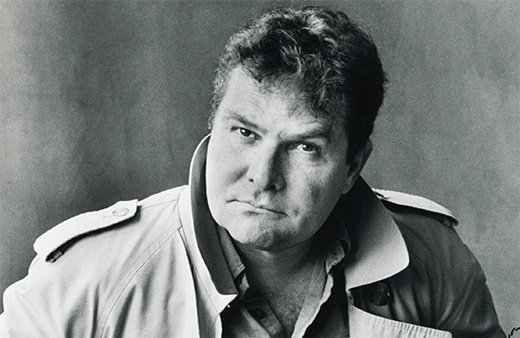 Denis Johnson died in May 2017 at the age of 67. Friends say often liked talking about Lou Reed, Joseph Conrad and the Book of Job.
N

He perfectly catches their mangled grammar, disconnected sentences, and the hypnotic quality of their apparently meandering revelations. His speakers, all of them men, may be chronic addicts, long-term convicts, or middle-aged writers pondering death. There’s also an ad-man whose grayed and frayed life is summed in in phone call in which he actually can’t figure out which of his ex-wives is speaking.

In this posthumous collection of five recent stories, about 40 pages each, these voices leap off the page, and grab your mind.

Winner of the 2007 National Book Award for “Tree of Smoke,” twice long-listed for the Pulitzer fiction prize, Johnson, who died in May 2017 at age 67, was a storyteller who whose damaged actors deliver stunningly raw revelations. His are America’s left-out people drowning in their own lives.

“The Starlight on Idaho,” the second story, follows rehab inmate Cass in his daily take of letter writing. It’s a key part of the reach-out program in his fourth-time-round detox. The center is housed in the ex “Starlight Motel,” now fatuously renamed as “The Starlight Addiction Recovery Center,” on Idaho Avenue in Ukiah, California.

Johnson’s Americans are broken, left-out people drowning in their own lives.

His life has fulfilled statistical probability in that he comes from a drugged-out dysfunctional family. Its members not likely herald their existence. Says Cass, “My oldest brother is somebody who the state of Texas won’t let him possess scissors.” Cass had has a long-term love affair with alcohol and drugs. Getting high “was a button I could push to destroy the known world.”

Despite his confused awareness of his own dead-end life, Cass still wants to survive. He may or may not be using the Starlight-provided pen and ink to put his thoughts on paper, but in his head he writes to Pope John Paul II, the Devil, his life-termer mother, plus anyone in his past or present who might keep him distant company during Starlight’s Sunday afternoon Family-Time, designed for confrontation and catharsis between family members.

So far, only his Bible-obsessed Grandma has showed up, with disastrous results. Screaming, she insists that AA is “an arm of the Devil,” and presents her vision of Jesus and Satan, Heaven and Hell. Maybe her flaming number at Family Time spurred Cass to “write” his “Dear Satan” note. “I can hear you talking to me… Are you worming around in my brain?

Cass’s worries are understandable. He’s 37. Drug and alcohol rehab is part of his parole but he still has enough criminal charges pending that if convicted he’d spend the rest of his life in jail. What’s left but hope, though his prayers to God hardly resemble religious conversion? For Johnson’s characters, what matters is that God, if he exists, promises a kind of salvation. 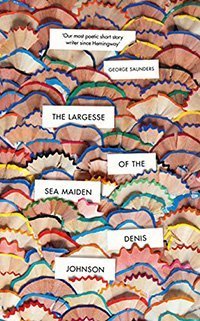 “The Largesse of the Sea Maiden” includes five stories about broken men.

The narrator of “Strangler Bob” is no exception to this cast of the downcast. Toward the end of his broken life, he recalls a brief prison stretch when he was 18 in the late 1960s. In county lockup his fellow mates decided to call “Dink,” poking fun at his short, puny stature. Prison life makes its own rules. “Most of us would have fit perfectly in a psych ward. Many of us had already been there. I certainly had.”

Fellow cons nicknamed Dink’s bizarre cellmate “Strangler Bob,” referring to his life term crime. The crime occurred one night when Bob and his wife ate a great steak dinner, after which to couple polished off a bottle of Beaujolais red. When they had an argument he “wrung her neck,” doing the same to one of the yard chickens she kept. He then cooked and ate it. While the other cons understand murder triggered by misunderstanding, they just don’t get how he ate all that chicken right after dining with, and killing, his wife. They don’t tell this to Bob, who seems to them to have a Martian mouth and Andromedan eyes. He also issues grim prophecies. When Bob tells Dink and two other prison pals they’ll be murderers someday, they worry fate is aligned against them.

Echoes of the supernatural, even if barely audible, appeal both to Johnson’s killers and victims. The paranormal constitutes a last chance for grace in their devastated life paths. Says Dink: “While I was there I wondered if this place was some kind of intersection for souls.”

This quasi-religious, quasi-mystical thread glimmers, fleetingly, throughout these five stories. His characters cling to it as to a lifeline. Johnson’s enormous talent lies in powerfully evoking both their anguish and their hope.