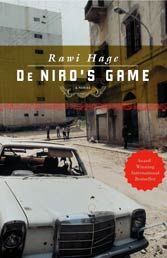 This is Lebanese-Canadian Hage’s first novel, a tough-guy, coming-of-age tale that morphs into a thriller. It mostly takes place during the Lebanese civil war in the 80s. Hage tries for poetic free-association, throwing everything but the kitchen sink into his many, many descriptive passages.

Here’s just one: “I looked at the sky. It was covered with light signals from faraway planets bursting with gas and the happy bonfires or dead human singing warrior songs in a landscape of burning rocks, and sending Morse code signals to ships steered by alcoholic captains into islands inhabited by sirens who sing in cabarets and offer up their salty sex organs that taste like the marinated fish of Sunday’s family gatherings after the families have endured the moralistic discourse of fat priests who douse congregations with incense spilled from the pendulum motion of their jerking hands, a motion that rocks like the swings in parks that are swamped with baby strollers pushed by Filipino nannies on temporary visas and with small pay checks that are transferred at Christmas to faraway families who live in huts by the sea that receives Morse code signals from those old creatures from astral space.”