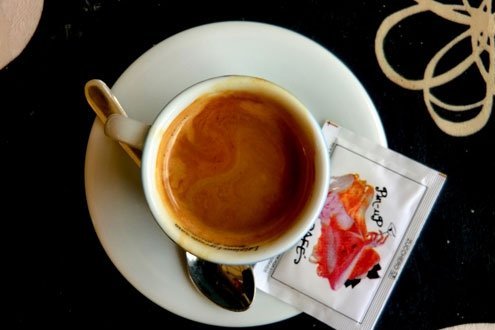 Wedded to one approach to what makes coffee coffee, Italians struggle with American variations.
I

talians are regimented about their caffè. Neapolitans won’t drink espresso outside Naples, deeming the “foreign” stuff vile and toxic. Espresso brewers throughout the country perform absurd propitiatory rituals to ensure their post-prandial Joe is just right. Some never wash the stovetop mocha pot to conserve flavor in the hardware parts. Others add a grain of rock salt in the water boiler. All will tell you never, ever to pat down the coffee powder in the filter. Cappuccino fundamentalists insist on not drinking any after 11 a.m., and especially after meals, when caffè rules.

Italian breakfast lovers prefer their caffellatte (Italian for café au lait) in large steaming bowls rather than in regular mugs to be slowly imbibed not at bar but in the privacy of their home, where dunking etiquette doesn’t apply.

In Italy, the word “bar” is vital to any understanding of coffee. Yes, a bar is a place where you can enjoy a shot of grappa between hands of briscola, or a glass of wine with snacks; but it’s also (in some cases, mostly) a café. It’s where you, a. Stand at the counter, knock back a shot of caffeinated rocket fuel, and proceed with the day’s other engagements; b. Purchase a carton of milk, bottles of spirits, drink freshly squeezed orange juice, eat sandwiches, pastries, cakes and gelato; or c. Take a seat at a small table and pay a little more for service to enjoy all of the above. Small neighborhood bars sometimes amount to a counter, cash register with no bar stools, and the occasional sad video-poker slot machine.

The Italian bar is a place where, if you’re a regular, you’ll hardly ever have to order. The barista will know your coffee preferences by heart. The level of trust between the average Italian and his coffee barista compares to that of Al Capone and his barber. The man at the espresso maker has the slant of whole days in his hands.

Some baristas are particular about how their patrons drink their products. I remember a kind gentleman in Naples who peacefully served delightful cups, smiling and addressing his clients in hushed tones. But he’d turn into Lucifer incarnate if they added sugar to the caffè, or — worse — took a sip of the complimentary palate-cleansing water after the coffee, and not before, effectively washing away the flavor. The pulsating vein in the center of the insulted barista’s forehead and his hissed complaints would usually scare away the water drinkers. The rest of the locals would shake their heads in support, and after a moment of silence, resume their loud conversations.

Some coffee fundamentalists prefer their espresso without sugar to help keep the flavor intact. Others opt for a drop of warm milk to cut the bitterness.

There’s also a standard type of milk (usually pasteurized whole milk), though non-fat is starting to make an appearance. Some places offer soymilk, but such requests are normally viewed with suspicion.

Say you want a caffeine jolt, a round, toasted bold flavor in your midday mouth, just enough propulsion to last you for the next five hours, but you don’t want to linger. A quick espresso fits the bill. But just the ordering process is a ritual that follows a certain protocol.

When you’re in a bar, head to the cashier and place your order. Espresso in Italy is referred to simply as caffè, so there’s no need to specify. You pay an average of 80-euro cents and you get a scontrino (receipt) and possibly some loose change (Note: aficionados or bar regulars may skip this initial step, and pay on their way out). You then take the receipt and place it, along with 20-50 cents, on the counter. This is not a tip, rather a customary sign of appreciation for the barista’s work. The coins get tossed in a communal pile and divided among the entire bar staff at the end of the day. Repeat your order to the barista and he or she will serve you your espresso in a porcelain demitasse with a saucer and a coffee spoon. Some bars will add a complimentary wrapped chocolate, and always a tall glass of cold tap water. The defining characteristics of caffè espresso include thickness and serving size. The most distinguishing characteristic of Italian bar espresso is the crema, a reddish-brown foam that floats on the surface and that in some cases is whipped with sugar, and served in place of regular sugar.

If instead you’ll be having your caffè sitting down, your order will be taken by a waiter at your table, and drinks served and paid for right there and then.

Beyond the simple espresso comes a whole universe of choices. The number of ways Italians enjoy the concentrated beverage brewed by forcing very hot water under high pressure through coffea Arabica beans that have been ground to a fine powder is at once finite and endless. Here’s an alphabetical shortlist of common espresso-based bar beverages.

Affogato translates to “drowned.” This is a shot of brewed espresso poured over a scoop of vanilla gelato commonly served as a dessert in restaurants, though some fancy bars and cafes with magnanimous baristas will sometimes dish it out over the counter.

Al vetro is espresso served in a shot glass. I hear this expression in my Roman neighborhood bar every morning, where it is actually pronounced ar vetro.

Americano is a challenge. The grandmasters of coffee struggle mightily to make a proper caffè Americano, which can drive some tourists bonkers. Instead of a percolated beverage, the Americano is a regular espresso served in a cappuccino cup together with a small pitcher of boiling water so the customer has control on the level of dilution. The request for Americano usually elicits an expression of sadness in the face of the barista, who must witness the debasement of his creation.

Bicerin is a traditional hot drink native to Turin. It’s made with espresso, hot chocolate and whole milk poured in layers in a small rounded glass with a metal handle. The word bicerin is Piemontese for “small glass.” Turin’s Caffè Al Bicerin in Piazza della Consolata bar has been serving it since the 18th century, and some eminent coffee authorities insist the drink was invented there.

Caffè Corretto consists of an espresso “corrected” with a shot of liquor, usually grappa, brandy or sambuca. Early-rising contractors have spiked caffé corretto for breakfast before hitting their construction site.

Caffè Lungo is an abomination: espresso that’s left to drip out of the coffee machine longer (hence the name), producing a more watered down, but not necessarily mellower, version of caffè.

Caffè Macchiato is espresso with a small shot of hot, foamed milk. “Macchiato” means “stained” and in this case the milk is white staining dark goodness. Hark! This is not a miniature cappuccino.

Cappuccino is an art. Besides perfectly brewed espresso, what matters most in a cappuccino is the texture and temperature of the milk. When a barista steams the milk for cappuccino, tiny bubbles of air are forced into the liquid, creating foam. This gives the milky drink its signature velvety texture. The traditional Italian cappuccino consists of a piping hot espresso, on which the barista pours the hot foamed milk from a metal pitcher, resulting in a one-inch thick milk foam cap. Perfect cappuccino can be topped (upon request) with a light dusting of cocoa powder.

Achieving the correct ratio of foam per cappuccino requires close attention while steaming the milk, which effectively makes cappuccino among the most difficult espresso-based beverages to make properly. Moreover, skilled baristas may obtain artistic shapes while pouring the milk on the top of the espresso with special wristwork. My barista Giovanni, when in a good mood, always draws a heart or a tulip in perfect cappuccino foam.

Caffè Doppio is a remarkable double shot of espresso. It is instant rescue for those mornings in which the weight of the world is stubbornly perched on your shoulders.

Latte Macchiato is not a Latte. Just so we’re clear: if you approach a barista with a request for a latte you will not get a caffeinated beverage. Latte means milk in Italian: plain old warm pre-bedtime milk. An American Latte is known here as latte macchiato (milk “stained” with a drop of espresso).

Grolla dell’Amicizia is a deadly blend of coffee and grappa served in a traditional bulbous wooden trophy cup that’s shaped like a multi-spouted teapot and communally shared between guests in the Valle d’Aosta and Piemonte regions to end a meal. Hit the slopes after one of those and you’ll find yourself snowplowing uphill.

Marocchino (also known as Espressino in Puglia) is an espresso topped with only milk foam, invariably served in a glass and dusted with profuse cocoa. I have Giovanni add a hint of cinnamon to mine.

Ristretto is a very “short” shot of espresso. The result is bolder, fuller, with more body and (oddly) less bitterness than an espresso. The exaggerated flavor makes ristretto the preferred choice of purists.

Caffè Sospeso is an exclusive Neapolitan custom that in some ways reflects the city’s philosophy. Naples has always been proverbially poor, but only in terms of cash, not nobility of heart. With caffè sospeso, instead of paying for your own espresso at the cashier, you, the average generous Neapolitan, also pays for a second one: a coffee intended for the next client in need, “suspended” until ordered. Later, anyone unable to afford un caffè will simply walk up to the counter and ask, “Do you have any caffè sospesi?” The fortunate beneficiary of caffè sospeso will never know who to thank. It’s a superb act of faith and compassion, trust and charity. Offering a ‘suspended coffee’ is like saying, “It’s on me” to the rest of the humanity.