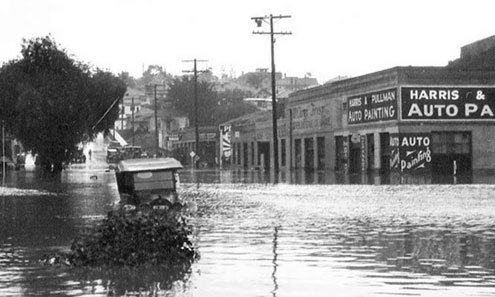 After Hatfield's "apparatus," the deluge...
B

and-Aids are nowhere in sight when human alarm goes feral. The rat-spawned Black Plague produced death by the millions over five lurid centuries and also gave early journalism a boost through Daniel Defoe’s “A Journal of the Plague Year,” a laconic novel rich in casualty figures and anecdotes about suppurating infection.

Human beings don’t do well with the invisible. Whether it’s sleeper cells or cancer, they bridle when blindsided. The Japan nuclear scare presents just that kind of blindsiding since the last such emergencies occurred half-a-generation ago, at Three Mile Island (1979) and in Chernobyl (1986). Both events were good for panic and pause.

Before that, radiation’s consequences were played out mostly in fiction. Monster movies dominated the bomb-crazy 1950s, with Japan rolling out celluloid mutations to reflect the country’s firsthand knowledge of A-Bomb offspring.

Though nuclear power has made considerable inroads since 1960 — supplying submarines turbines and power plants — it failed to shed its Scarlet Letter status. Post-Test Ban Treaty governments worried that nuclear weapons could fall into the “wrong” hands, and still do, while accidents helped environmentalists point out the risks of mishandled fission.

Michael Douglas kick-started his movie career with a 1979 California reactor meltdown flick called “The China Syndrome” in which nuclear plant managers are sloppy and investigative journalists worse. An earthquake starts the meltdown. The movie was an international hit.

After the 1973 oil embargo, France, a seismically tranquil state, accelerated its nuclear program, building dozens of plants that now supply three quarters of the country’s power with exports to Germany, Britain and Italy. A severe earthquake in the French Atlantic northeast or its sub-alpine southwest, where most reactors are situated, would trump the Japanese panorama a hundredfold.

The humbling brought on by seismic and atomic shakes is further irritated by secular society’s thorny relationship with so-called Acts of God. Since state morality and social duty is tied not only to repair and redress but also to “never again” pledges, situations in which stress can’t be quickly assuaged make for low-grade mental illness.

Security-obsessed societies are vulnerable to alarmism that once established feeds on itself, spreading stress as a sickness. Coverage of the September 11 terrorist attacks set the panic benchmark, producing a focused totality of dread never before seen in human history, its “visual aids” positioned on a lurid merry-go-round. Disaster is now impregnated with portentousness and freighted with the possibility of personal consequence — someone else’s radiation could well be your own, unless you’re careful.

Affluence has also heightened sensitivity toward biblical misfortune, since most people can’t remember ancestors whose day-to-day lives were savaged by war, disease and incidental reversals. The planet is instead billed as at constant risk, which calamity only confirms, savaged landscapes making the rounds as gorgeously autopsied proof. The word “precaution” is a bad omen while a stiff upper lip is naïve. Not a good recipe for a manned mission to Mars.

Japan’s woes have already led to nuclear energy second-guessing on a global scale. Though it’s unlikely to endure much past the worst of the scare, it does evidence the instability of the 21st-century relationship between advanced safekeeping and seismic whim, with the latter inevitably wreaking havoc on the best laid plans and leaving hand-held camera mortals to ask for whom the bell tolls.

The sighing is loud enough to wake the ghost of Charles Hatfield, a sewing machine salesman-turned-rainmaker who was ruined by his nature-fixing promises. In 1915, drought-stricken San Diego promised Hatfield $10,000 if he’d make rain enough to fill a local reservoir. He built a tower near a lake containing a “moisture acceleration apparatus,” and soon after… the rain began. Ark-like rain. So much rain that dams overflowed. One even broke, producing an inland tsunami that killed at least 50 people, most of them Japanese immigrant fishermen whose boats were smashed.

When Hatfield asked for his money (“I have fulfilled my contract…”), the city told him it faced millions in property damages from the flooding and deaths. Courts finally ruled against Hatfield and called the rains an Act of God. Intrigued by the story, an American rock band honored him with a song called “Hatfield” — “Science from the cooking pot mixing up with the air,” goes one verse. The band is aptly named: “Widespread Panic.”