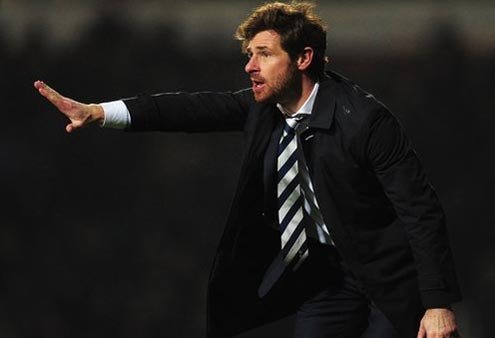 André Villas-Boas has put Tottenham in striking distance of the Champions League.
O

ne could be forgiven for thinking that André Villas-Boas had spent more than just 20 months in London. Since taking up the reins at Chelsea in the summer of 2011 (a short-lived stint), the conveniently nicknamed AVB has been at the center of British sports media attention.

Relentlessly compared with his Portuguese compatriot and mentor José Mourinho, who left Chelsea for Inter Milan and then Real Madrid, the current manager of Tottenham Hotspur and “The Special One” share a number of basic bonds.

Crucial to Villas-Boas’ rapid rise to the top of club football has been his mastery of the English language, a path that Mourinho pioneered.

For all the misgivings Chelsea supporters may still harbor regarding Villas-Boas’ short-lived, unsuccessful reign at Stamford Bridge, many will admit that he was, at least, the most eloquent man they’ve had in charge since Mourinho himself; not that the intervening incumbents, Luiz Felipe Scolari, Avram Grant and Carlo Ancelotti — Brazilian, Israeli and Italian, respectively — provided much competition.

Villas-Boas’ career, like that of Morinho, was set into motion by the late Sir Bobby Robson — who while coaching at FC Porto and Barcelona used Mourinho as a translator.

Robson, an all-time English legend, was already something of a cult figure after highly successful stints at Ipswich Town, the England national team, and PSV Eindhoven. He would be revered too at FC Porto, which he led to consecutive league titles and a domestic trophy between 1994 and 1996.

At the time, the 16-year-old Villa Boas was attending matches regularly to cheer on his beloved Os Dragoes. While he would never take to the field himself (unlike almost all other football managers), he was eager to enter the game in some capacity and had been planning to do a course in physical education. The fate intervened.

Although Robson had delivered silverware to the Estadio Dragao, AVB couldn’t understand why the Englishman tended to keep free-scoring striker Domingos Paciencia on the bench. He was eager to let him know what he thought.

Despite sharing an apartment block with the Porto coach, Villas-Boas was apprehensive about approaching him in person, so he vented his displeasure in writing, posting Robson a letter.

Impressed by the quality of Villas-Boas’ argument, Robson asked him to back it up by compiling statistics from Porto’s next few games. Indeed, the subsequent reports were so detailed that Robson invited him to work as a trainee coach with the club’s youth team.

Still only a teenager himself, Villas-Boas worked his way up the coaching ranks at Porto and scouted the side’s opponents upon Mourinho’s return to the club as manager in 2002. He played a similar support role to “The Special One” at Chelsea and Inter Milan.

In 2010, Villas-Boas finally got his chance with Porto as manager. The result was a treble: domestic league title, cup and Europa League title.

At this point, parallels with Mourinho were inevitable, and before anyone knew it AVB was on his way to Stamford Bridge to the dismay of many Porto supporters.

The ever-worsening impatience of Chelsea owner Roman Abramovich makes it impossible to know if Villas-Boas might have been a success at Chelsea.

There’s little doubt he required (and possibly deserved) more time. It was common knowledge that Ancelotti’s double-winning side of 2010 effectively marked the end of “the team Mourinho made,” so-to-speak, and that the club was due a necessary rebuilding process.

After all, if a club manager as illustrious as Ancelotti struggled to produce results in his final Chelsea season (even the Italian deserved another year), what could Villas-Boas realistically have been expected to achieve in seven months?

But time isn’t an issue when luck takes over. Roberto Di Matteo’s Champions League triumph, after just three months in charge, certainly falls into the luck bracket. That mad night in Munich (not to mention other manic goal-line clearances and missiles rebounding off Chelsea’s woodwork in previous rounds) seemed to render Villas-Boas’ premature dismissal both timely and justified.

But since Di Matteo’s sacking and Rafa Benitez’ vastly unpopular appointment last autumn, Blues fans couldn’t be blamed for affording the odd nostalgic glance across London to White Hart Lane, where last season’s scapegoat and last summer’s forgotten man has re-established himself in the memories of the Stamford Bridge crowd.

Indeed, as Chelsea battle with Tottenham and Arsenal for the final two Champions League spots, Villas-Boas could yet have the last laugh.

Impressively, the 35-year-old manager has successfully remodeled a Spurs side that threatened to disintegrate towards the end of Harry Redknapp’s reign while maintaining a serious challenge for Champions League qualification.

What is most telling, aside from what happens in the Champions League fight, is how Villas-Boas has established himself as a fan favorite in the white half of North London. On the other side of the city, once Benitez’ temporary contract expires, Chelsea will continue its seemingly never-ending quest to replace Mourinho.