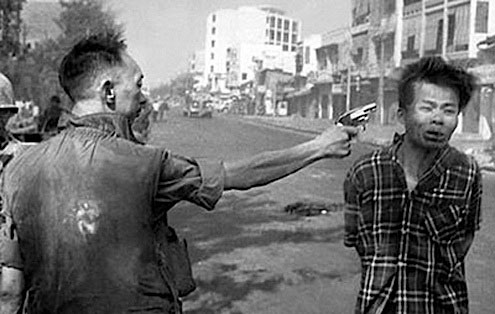 i>In this Michael Goodwin column on a George W. Bush speech about the Iraq war, President Bush’s name has been substituted with that of President Lyndon Johnson and all references to Iraq have been changed to Vietnam. If the reader replaces Johnson with Bush and Vietnam with Iraq, the Goodwin column all but returns to its original form — suggesting troubling similarities between the predicaments.

“President Johnson made the sale last night — but only temporarily. His pitch for the Vietnam war was about as good as it could be, but not good enough to hold broad public support for very long.

The problem is that Johnson had almost nothing new to say. With millions of Americans turning against the war, and his handling of it, he appealed for patience and tried to put a sunnyside-up spin on progress, a word he used repeatedly.

But Americans don’t feel the status quo is good enough, or worth it. Absent clear gains, the public is not likely to rally around calls for patience and courage. Nor will Johnson’s six mentions of controlling the spread of communism fire up faltering resolve on Vietnam.

More likely, support will continue to erode with each passing day of blood and mayhem. No words can change that.

After a flat start where he seemed to be reading his speech instead of delivering it, Johnson gradually warmed to the task in front of 750 soldiers at North Carolina’s Fort Bragg. Their silence, except for one round of polite applause, added to the solemnity.

So, too, did the finish, where Johnson struggled against tears, a mark of how deeply he feels the mission and the loss of thousands of American lives.

But Johnson’s sincerity is no longer the issue. That was last year’s campaign. The question now is whether we’re stuck in a war we can’t quit and can’t win.

Shockingly, and grimly, the President suggested that the answer was yes. He cited political gains, such as the recent Vietnamese vote, but made no promises that the way forward would get easier.

Instead, he tried to summon our tougher angels, saying Americans had always confronted tyranny and brutality with courage. And he left no doubt that, for him at least, there is no quit.

He rightly drew a clear line in the sand, saying a timetable for withdrawal would be a huge mistake both for our troops and our cause. Indeed, that is the one aspect of the war where Americans still support him.

The only other arrow in Johnson’s quiver is the support for his handling of the overall war against communism. That explains why he frequently linked the war to stopping the spread of communism and Soviet influence. He didn’t come out and say the Soviet Union was directly involved; rather, he said “the only way our enemies can succeed is if we forget the lessons of is if we abandon the Vietnamese people to men like Ho Chi Minh — and if we yield the future of Asia to our enemies.”

That’s a slick phrasing that aims to remind people why they initially supported the war. But the burden now is a litany of false claims that, at best, make the war’s execution look inept.

Start with the “Turning the Tide” banner of May 1, 1965, when the President jauntily declared the U.S. was winning the war. At that time, 14,000 American troops had been killed. Or consider Defense Secretary Robert McNamara’s claim six weeks later that only “dead-enders” were obstructing us. Some 12,000 were dead then. Then came Vice President Humphrey’s recent foolish claim that the insurgency is in “its last throes.”

None of those things turned out to be true. And unless Johnson can soon show major, clear progress, last night’s speech will either be forgotten or become one more mark against him.”