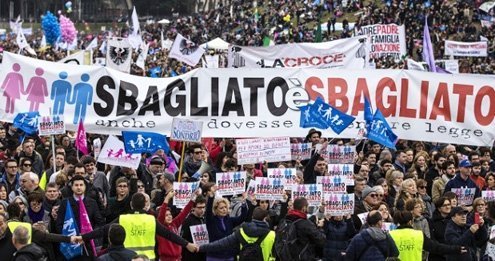 ne of the dilemmas of the democratic process is that minority groups must wait for the benevolence of the majority to grant them their basic human rights, and that can be a very long wait indeed. Yet democracy, albeit slowly, still struggles forward toward universal justice. The advances in human rights that LGBT people have won in the West in recent years exceed my wildest expectations.

But Italy, the only major Western European country with no civil partnerships or gay marriage, remains stuck in a time warp, mostly propagated by the lovely folks who also sponsored the Dark Ages.

I remember back to 1994 in Toronto, when the Ontario provincial government promised to amend the definition of “spouse” in provincial statutes so that same-sex couples would receive rights and obligations nearly equal to those of opposite-sex common law couples.

Euphoria that spread through Church Street, the city’s “Gay Village.” It seemed we were on the verge of finally obtaining judicial recognition that would allow many same-sex partners with children to legally represent their families and protect them in the event of a catastrophe. On May 17, 1994, the Ontario provincial government led by Bob Rea formally introduced a bill proposing civil union status for same-sex couples. Known as the Equality Rights Statute Amendment Act, the bill passed first reading — a staple of the parliamentary system — by a handful of votes. The LGBT community buzzed with activity, organization and strategy meetings.

By time of the second reading in June, public resistance had mounted. Opponents claimed that gay people were trying to destroy the traditional family. Children should have both a mother and father, they said, and gays were only looking to cash in on pension plans. In an attempt to salvage the bill, the government dropped its most controversial provisions, including adoption rights. Since Rea’s New Democratic Party led a minority government that didn’t want to risk a non-confidence vote, the leadership allowed for individual voting based on conscience, freeing legislators from their party ties. Not surprisingly the bill was defeated.

It was a horribly disillusioning moment. Many of us felt betrayed by a legislature that had held the gay community up for public scrutiny but failed to adequately support it when things got rough. Now more than 20 years later, and a continent away, I feel as if history is repeating itself.

Last year, the European Court of Human Rights ruled Italy had violated human rights by failing to offer sufficient legal protection for same-sex couples. Democratic Party Prime Minister Matteo Renzi and his coalition government, seeking to burnish its reputation among EU “A-listers” and look good in the eyes of the United States, introduced a civil union bill that would recognize same-sex couples.

Early this year, supporters of the civil union legislation rallied in more than 80 cities across Italy. Soon after, however, an opposing crowd packed Rome’s Circus Maximus. Organizers claimed it drew more than two million, though it was soon clear the figure had been wildly inflated. The crowd included nuns, priests, mothers, fathers, and small children. They listened and often cheered as speakers talked about their desire to keep marriage between one man and one woman. They were even more adamant about not letting homosexual couples adopt children. A new twist came in the form of decrying what rally organizer Massimo Gandolfini, a neurosurgeon in a Catholic hospital, called “the sale of a uterus.” From his perspective, legal protection of same-sex parent families would inevitably lead to a massive wave of male gay couples seeking surrogate wombs (a problem not faced by lesbians couples).

So it is that the Italian vote will head to parliament with the Ontario caveat: lawmakers will be allowed to vote based on their own conscience. There’s a distinct possibility that existing legislation will be split up, allowing legal recognition of same-sex couples in some bureaucratic matters (taxes and permits) while keeping adoption off limits, since that’s the part of the bill that’s driving the fiercest opposition. Though some politicians might back new laws if adoption is out of the picture, scores more refuse to support any revisions that would acknowledge same-sex rights.

Those within the privileged heterosexual confines of what Italy defines as a family can rest assured their spouses and children are protected should something dire befall them. Same-sex couples and same-sex parents in Italy face a very different reality. If my partner Alberto were hospitalized (our Canadian marriage isn’t recognize here), I would have no right to visit him in intensive care or to instruct his doctors on his behalf. Should he die, I have no legal inheritance rights and would likely face an enormous tax burden just to remain in our own home. Same-sex couples with children face an even more precarious situation. Non-biological parents have no rights and no voice regarding the care and wellbeing of their children in hospitals or at schools. In the event the biological parent dies, the non-biological parent has no legal rights to the child. The child is removed for adoption and the entire family is wiped out.

Italian public opinion remains fiercely divided. The country’s political leadership, while committed to looking good internationally, has so far seemed unwilling to take major chances at home. That means the fate of untold numbers of LGBT families, couples and individuals in Italy hangs in the balance.