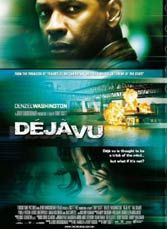 After a terrorist explosion on a New Orleans harbor ferry kills hundreds of Navy sailors and their families, local ATF agent Doug Carlin (Denzel Washington) is summoned to a corpse of a woman who’s a ringer for the blast victims. But she died an hour before the explosion. Solve that crime, Carlin tells the FBI, and you solve the mystery.

Carlin, an ex-Marine and New Orleans native who stuck it out post-Katrina, is a perfect crime-solver. The FBI (in the person of Val Kilmer) asks him to advise a new unit that uses new satellite technology known as “Snow White” to analyze real-time images of four-day-old events. The nerdy analysts say they can track “a single trailing moment of now, in the past,” which isn’t the whole truth.

When Carlin gets “Snow White” trained on the dead woman, the past proves both imperfect and available to enhancement. Director Tony Scott’s hi-tech thriller is a chaotically inferior amalgam of “Back to the Future” and “Minority Report,” kinetic voyeurism that puts terrorism, conspiracy, worm holes, and delusions of grandeur into a Martini shaker. It’s pre-emption redefined. Scott (“Top Gun,” “True Romance,” “Man on Fire”) and SWAT-meister Jerry Bruckheimer are great with adrenalin rushes but uninterested in flesh-and-blood people.

If you ever wondered why messing with the past was a no-no for Superman (too exhausting), here’s a two-hour explanation. On the plus side, Washington is always a treat. And who knew that dying gets you the girl?