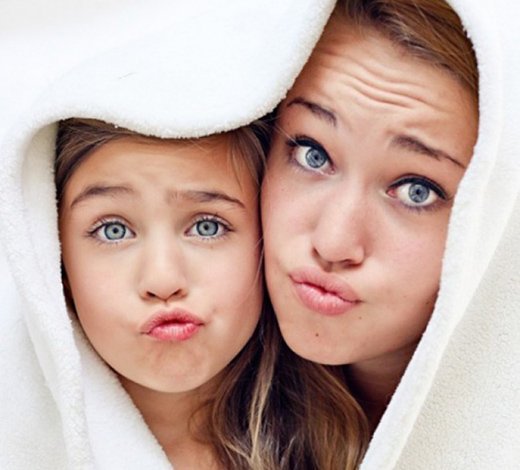 ife comes with only a few universal experiences. Benjamin Franklin once said that everything about it was uncertain — except death and taxes. I’d like to add another inevitability to the list in the form of the parent who utters the following line to their child: “Someday you’ll be just like me and you’ll understand.” Most children, when they hear this, roll their eyes and snort “Okay,” all the while swearing silently that they’ll never, ever become like their parents.

But fast-forward twenty years and that’s exactly who they’ve become: their parents.

Maybe we shouldn’t be waiting on the edge of our seats seeing how we turn out. Maybe, genetically speaking, we’re wired to reflect our parents 50-50 style.

But if genetics makes these demands, my question is how? What’s the method? How is the genetic code transliterated into reasoning? Do we reflect our parents’ traits because we can’t help ourselves?

For example, my parents always insisted on good table manners, holding forks a certain way, using a knife and fork another way. So am I an etiquette timebomb waiting to explode? I was raised to care about table manners. Is it only a matter of time before I start to correcting the flaws of others? Will genetics turn me into a manners-spewing propagandist, courtesy of my parents? Is inner human wiring powerful to resist?

Or does our intimate version of back-to-the-future occur because we see our parents out and about in the world and seek to imitate them, at heart always remaining their children no matter what disagreements might arise? Do I choose to do certain things a certain way because it’s easier to follow my training than breaking from what I know?

I waited patiently for months to get white percale sheets with blue embroidered borders. The result? My bed now looks like my mother’s.

I once strongly preferred reds, but I’ve recently taken a liking to white, my father’s preference. Usually I wouldn’t give wine choices much thought. But it’s summer. I go to dinner parties where the question “red or white?” comes up regularly. My once-automatic response, “red,” is no longer a sure thing. My father’s gene has started coaxing me. Again, though, just how does this work? Given a choice, I now go with my father’s preferred white. Do I do this because it’s easier? Or has my preference for red wines genuinely been replaced? Who or what is pulling the levers, and how do genetic conspiracies work?

Have I been brainwashed by father’s genes, which in turn have infiltrated my taste buds? (I imagine all this in terms of a heist in which my taste buds are shushed by fedora-wearing DNA sequences that, revolvers in hand, assure me that everything will be all right. “It’s okay, kid, so you like white now. It had to happen.”)

Maybe genetic gamesmanship will forever elude our understanding. I do know that some of these parental influences are so subtle I’m only able to catch them after they’ve happened. Much like about-to-hatch caterpillars aren’t told, “Okay toots, look, just pop in here, stay put for a hot second, then you’ll be a butterfly. Got it?”

No orders come down from above. It just happens. One day you start doing things and behaving in ways you find eerily familiar. For example, I waited patiently for months to get white percale sheets with blue embroidered borders. The result? My bed now looks like my mother’s. I have to work to stop myself from shouting translations of lyrics from Mina songs to my non-Italian speaking friends — the way my father once shouted explanations of Don Giovanni’s aria lyrics in the car.

Not that I’m complaining. Not really. Growing up is genuinely bizarre. Dejà-vu can feel like dejà-vous! (already you!). If I’ve become my parents I can rest assured, they long ago became theirs. I now wonder if we compelled to turn into our grandparents. So many questions, so little time. That’s youth for you.

One thing I do know, however: as much as my mother tells me I’ll stop caring because she stopped caring, I doubt the day will come when I won’t mind using the same knife that cut the apple to cut the cheese. Some genes you make up along the way.