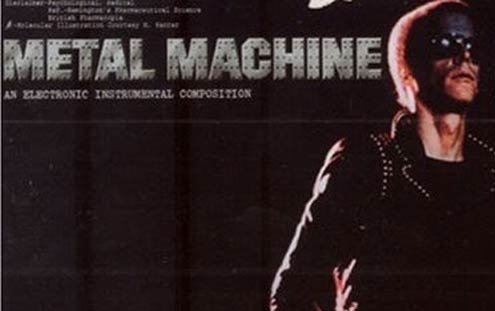 Lester Bangs on MMM, mockingly: "The greatest album ever made."
T

he other evening, while stuffing envelopes, I found myself listening to “Metal Machine Music” (MMM), Lou Reed’s 1975 masterpiece of deafening electronic guitar noise. I’d just discovered the full album on YouTube, so I decided to feed my laptop through a boombox and amp up the volume while my hands and brain enacted their mechanical maneuvers ad nauseam. It proved a perfect match.

I first received a copy of Reed’s mythical LP for my 22nd birthday. At the time I was obsessed with anything Velvet (Underground). I had collected an array vinyl bootlegs at various record shops on the Lower East Side, but MMM was the ultimate jewel in the crown of a Reed fan. It was an album everyone knew about but few had actually heard. Rock critic Lester Bangs had mockingly called it “the greatest album ever made.” My sneaking suspicion was that it actually was.

In those days records had to be tracked down like truffles. It was the mid-1990s and you could find anything in Manhattan if you looked hard enough. In fact, much of the enjoyment to be had from record collecting was in the hunt. The music wasn’t always the best, but if you spent your time reading obsessive rock critics like Bangs you might begin to think there was something, er, magical about it all.

A friend on whose couch I was living knew of my obsession with MMM. So when he presented me with a worn copy of the — ahem — double album he also knew I’d put it on immediately. Though his tastes were more mainstream than mine, his curiosity had been a little piqued by my fanboy babble.

Each side was exactly 16:01 long. Reed himself graced the cover in a short black leather jacket, bleached hair and sunglasses. He looked like an extra from the “Rocky Horror Picture Show.” He had even penned a few thoughtful liner notes for his fans. “My week beats your year,” said Lou. “At least he’s sincere,” I thought.

We braced ourselves as I slid the disc onto the turntable. It was predictably unscratched. This was the moment of truth.

I doubt anyone else in the room stayed to hear the entire album. The “music” was exactly what I had read about it: pure white noise from beginning to end. But there was no beginning and no end. It was like the sound equivalent of “Finnegan’s Wake”: a unique but painful experiment in going to extremes, circling back on itself like the self-devouring Ourobouros. But music — as my bubbeh might say — it wasn’t.

I suppose my love of chaotic noise began in college when I fell head over heels for Robert Rauschenberg. In Rauschenberg’s view there seemed to be no distinction between painting and sculpture (my major), or between trash and art for that matter. I began to imitate his work immediately and filled my canvasses with flotsam culled from Richmond dumpsters and broad swaths of dirty paint.

Once I carried things a bit too far. I had set up an experimental “event” inspired by Swiss artist Jean Tinguely’s kinetic, self-destroying sculptures. The production included latex surgical gloves, turpentine and — you might’ve guessed it — fire.

As we went around the room inspecting each student’s end-of-term project my piece began its slow process of self-destruction. Things got out of hand quickly, though. Flames engulfed a corner of the room, fire alarms went off and water began to sprinkle down from the ceiling. The entire building had to be evacuated.

My art career didn’t last long after that. By the time I arrived in New York City I was on a steady diet of cultural noise, though. If it looked or sounded “clean” I pooh-poohed it. Everything had to have an edge. Everything — music, art, clothes, friends — had to be on the verge of self-destruction.

Italians have an expression, deformazione professionale. It means, roughly, if all you have is a hammer, everything begins to look like a nail. When I was in New York, everything looked — and sounded — like a smashed car radio.

I’ve since grown up. I now appreciate Gershwin, Cézanne and quiet evenings by the fireplace. I’m what I might have called “dull” half a lifetime ago. But every so often I feel the pull of my old self. In those moments I cut myself off from the rest of the world, turn the volume up and fade away into a hazy realm of horrible, delectable noise.

It keeps me sane.