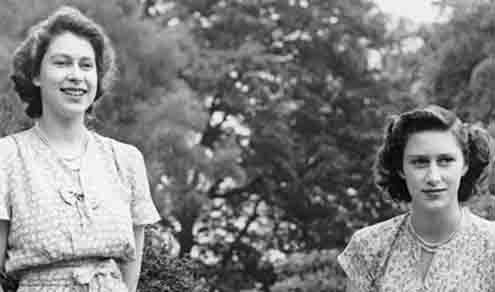 Princesses Elizabeth and Margaret in their 1940s youth: Big choices would loom soon.
&

#8220;To build may have to be the slow and laborious task of years. To destroy can be the thoughtless act of a single day” — Winston Churchill

The fury of America’s 13 colonies over punitive British laws ignited the Revolutionary War. Patriots shed blood for independence while loyalists did the same in defense of the English monarchy. The result was two countries cut from the same cloth, both proudly bound to the idea of individual rights secured by law and guarded by legislatures and courts.

Those rights along with the powers and limitations of government had their birth in the English Magna Carta of 1215. Its values underlie British political ethics and were set down in the U.S. Constitution of 1787.

The blood spilled in the name of the painstakingly crafted words that appear in both countries’ Bill of Rights, words exalted by both citizenries, mean that they hold sway over any head of state. The words give leaders a sense of duty and obligation that rise above personal bias.

In 1955, newly crowned Queen Elizabeth II, then 25 years old, was confronted with a choice. She had made two solemn promises in her young life and both were now at odds.

Princess Margaret, her sister, desperately wished to marry RAF officer Peter Townsend, a divorcee. But the Royal Marriages Act of 1772 stood in the way. The feudal-era law forbade an heir to the throne to marry a divorced person while their spouse was still alive, which Townsend’s ex-spouse was.

As children, Elizabeth and Margaret had pledged an oath to their dying father, King George VI, that neither sister would ever let the other one down. Had she chosen to put family first, young Queen Elizabeth could have pressed parliament into passing a law permitting Margaret’s marriage.

But at that crossroads other forces came in to play.

At her coronation 18 months earlier, in the presence of the Archbishop of Canterbury, holding the Scepter of State in one hand and the Rod of Equity and Mercy in the other, Elizabeth swore to govern the realms of the kingdom by their respective laws and to maintain the Laws of God.

As queen, she became head of the Church of England. Under church dogma, marriage was indissoluble.

Most importantly, Elizabeth was a member of the Royal Family from birth. She had been raised and educated according to the laws and teachings of the British realm and as such knew full well that the monarchy and church doctrine were inviolable. It was in her blood.

So while Elizabeth may have found her sister’s quandary a perplexing personal question, the kingdom and church were hers to defend. She forbade Margaret to marry Townsend to avoid a constitutional crisis. She understood and upheld the rule of law, even if it undermined her pledge to her sister. She refused to put herself first.

The U.S. presidential oath of office carries some of the same burdens. A new president must swear or affirm, “to preserve, protect and defend the Constitution of the United States.” There are no shadings or exceptions in the tone of the language. There is no wiggle-room.

In January, when President Donald J. Trump spoke those words and took office, he found himself in an enviable position. His Republican Party held a majority in both houses of Congress. He was faced with no Elizabeth-like quandary. He only had to try to unify the country and carry out his oath. Instead, while that oath was still warm, he chose almost daily to attack the U.S. Constitution’s First Amendment right to the free exercise of religion and to undermine the free press. Most troubling, he behaved in a way that seemed to belie any awareness of the Constitution’s existence. Unlike the queen, he seemed untouched by deeper obligations.

The court system blocked his attempt to ban Muslims from certain countries from entering the United States, while his repeated efforts to delegitimize mass media and prevent it from unmasking his continuous stream of deceits have so far been blunted by the fourth estate’s own diligence.

The constitutional U.S. has withstood the Civil War, Watergate, McCarthyism, and the contested election between George W. Bush and Al Gore. In each case it was an overriding belief in the legitimacy of the principles of the country’s founding document that won the day. In any forthcoming fight between Trump and the U.S. Constitution, my money is on the parchment.

But the lesson of Elizabeth and her intrinsic understanding of the rule of law and civics no longer rule the day. We must stay vigilant and aggressively call out fouls. When a president is oblivious to law, chooses to interpret it subjectively, or tramples on its very existence, it is up to the citizens of the nation to ensure he hews to the legal and moral standards on which that nation was founded.