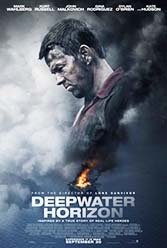 If Peter Berg’s account of the catastrophic 2010 Deepwater Horizon oil rig disaster has a flaw, it’s an excess of fire — not that fire wasn’t the disaster’s televised leitmotif. The explosion and ensuing blaze left 11 men dead and burned on for three months, polluting the Gulf of Mexico off Louisiana in what remains the worst oil industry disaster in U.S. history.

Berg begins promisingly, putting the story in the skeptical eyes of electronic technician Mike Williams (Mark Wahlberg). From the moment he and rig supervisor, Jimmy Harrell known as Mr. Jimmy (Kurt Russell) land on the motorized rig, red flags are everywhere. British Petroleum’s American officials, running weeks late on the exploratory project, have opted to take shortcuts. A critical cement check has been bypassed. The rig, Williams tells unctuous BP boss Don Vindrine — John Malkovich, in a brief but movie-stealing stint — that the 320-foot tall rig is held together by “Band-Aids and bubblegum.” Others call it the “well from Hell.” The technical buildup — pipes quivering on the ocean floor, valves and gauges at the ready to go wild — spike the mood with genuine ominousness. The physical and visual narrative is taught, fraught, and edgy. Berg does his best to explain just what happened and why.

Alas, a true story is a true story, which means the well from hell has no choice but to morph into an inferno — and the inferno is served again and again, hotter by the minute. But from that moment on the movie views like a string of incendiary bombs. Fires suck the story’s air. Images blur. The hour-long fight for survival, while vivid, depends entirely on a string of special effects. Yes, the rig blew spectacularly, but Berg in this case might have been smarter to downsize the fiery scope and remain closer to his characters, credible people who for the first 40 minutes deliver a tense film about warnings unheeded (in fact, some went back a decade). It is that critical part of story which is left to implode. More’s the pity.