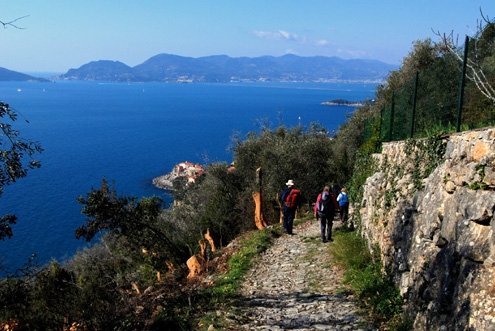 e clap our hands to ward off the early morning chill as we wait to board the hired bus outside Milan’s central train station. It’s still dark when our hiking association guide announces that everyone is present and we’re ready to roll.

We’re going to the southern tip of Liguria, the region shaped like a boomerang on the northwest coast of Italy on the Mediterranean Sea. It will take us about two hours to get there.

Our bus speeds down the A15 highway through Emilia-Romagna and the Lunigiana region of Tuscany, toward the A12 and the mouth of the Magra River. The snow-topped crests of the Apennines shimmer in the early light. Behind them to the south, the white-capped Apuane Mountain range appears vertical and rigid. It rises from Massa Carrara, where quarries that supplied marble to Michelangelo still operate. The Maritime Alps of Liguria stop north of the Magra River.

The three ranges meet here, as do the regions of Emilia, Tuscany and Liguria.

The bus crosses into Liguria and soon there are groves of maritime pines, a sign of salt water and the sea nearby. At Bocca di Magra a carpet of moored sailboats bobs in the February wind.

Beyond is the Ligurian Sea. Our bus will meet us again in Lerici in the late afternoon.

Magra toward the Maritime hills. We begin an easy climb up Montemarcello, so named for the Roman consul, Marco Claudio Marcello, who conquered the Liguri tribes here in 155 B.C. As we rise, the houses become large villas on terraced grounds. We reach a footpath parallel to the road and begin a leisurely ascent of about 300 meters mainly through woods. We follow the Club Alpino Italiano (CAI) signs of red and white painted stripes. Behind us, the fertile plain of the Magra River spreads before the Apuane Alps.

We bypass the town of Montemarcello that dominates the promontory of Caprione. In 90 minutes, it’s 11.30 a.m. and we reach the village of Zanego. The group rushes to a stone wall spurred by the view. Below is the Gulf of La Spezia. Ahead is open water.

While the others run off, I follow a lane along the wall overlooking the sea. An elderly woman emerges from her house with happy eyes and wrinkled skin. To live with this panorama, I think.

Someone behind me asks if there is any property for sale.

Behind the house is a small cobbled square. A large stone with a weathered Etruscan face squats in a corner near an ancient tree. I find a sunny place to sit. Two grey cats survey the scene.

Their noses lead them to the hikers’ snacks. Perhaps their predecessors did the same at the first parliament of Montemarcello, held in the open in Zanego in 1328. During the Middle Ages the area was governed in turn by Lucca, Milan and Genoa. The Florentines attacked it while at war with Genoa.

From Zanego we descend on the trail to Tellaro, a pretty town on the coast. Some hikers pause at a restaurant while we go down the narrow lanes to the seashore to picnic on the rocks.

Rested and some with faces flushed by the local wine, we climb about 200 meters from the main square and take the higher path instead of a faster, easier route from the port along the coast to Lerici. Like most trails in Liguria, the ascent is quick and then remains quite level.

Along the terraces, the mimosa trees in bloom are doubly resplendent in the sun; so laden with millions of small yellow pompom flowers that the branches hang down almost to the ground.

The view is spectacular. On the gulf, hundreds of sailboats bob off the islands of Isola del Tino and Isola Palmaria. The guide points out the Cinque Terre, the city of La Spezia with its harbor and naval port and the town of Portovenere, famous for its wealthy summer residents.

Lord Byron stayed there and would swim across the bay, an unusual activity in those days. Perhaps it was to visit Percy Shelley at the villa Magni in San Terenzo near Lerici. Shelley composed his final poem, “Triumph of Life” in his boat out on the bay. This is why the Golfo di La Spezia is also known as Golfo dei Poeti.

The descent to Lerici is quick. There is a long queue of tourists at the ice cream parlor in the main square. The castle is closed.

“Juliet! Attention!” I hear a familiar accent from home and see a mother running after a

I swing a surprised Juliet in the air. “Je suis d’Ottawa,” I say in rusty French.

My husband and I steal away around a corner to a bar. It is full of provincial, fur-coated matrons in animated conversation and silent, pouty-mouthed couples watching the street. Youths parade by in the latest fashion.

We leave Liguria’s sunny microclimate behind. On the bus ride back to drab wintry Milan, I watch the snow-capped Apennines turn dark rose in the setting sun.

— Follow these links to for more information. Some, not all, have English-language sections. The Parco Naturale Regionale di Montemarcello site is very useful. More about the area can be found at the Comune and Liguria Pocket. There are also hiking intineraries in Italian.