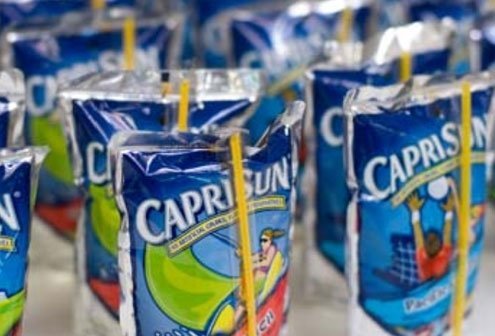 I collected Capri Sun juice bags for a week, hiding them in my suitcase at our cottage.
W

hen I was a girl, maybe three or four, I was already swimming in the deep end. My mom says that before I learned to doggy paddle, I’d swim underwater for long stretches like a turtle, popping my head up for air.

We lived in Michigan and my parents would take us to the YMCA during the long fall and winter months. We’d go as a group, friends and family, but what I remember most is the underwater solitude. From a young age, it was what I sought. On the surface, I’d put on my snorkel mask and lie on my back. I’d let out my breath slowly and let myself sink to the bottom. The strong fluorescent lights above flashed and refracted through the water.

For as long as I could hold my breath, I forgot the splashing and screaming made by my brother and his friends at the surface. I just watched the fluorescent light grow and move, pink and blue at the edges, with a warm, blinding, enigmatically inviting yellow-white at the center.

When I was 10, I collected Capri Sun juice bags for a week, hiding them in my suitcase at our cottage. I secretly schemed an escape to the bottom of our lake. The plan was simple: I blew air into the bags through their straws, put them in a mesh sack, waited until no one was watching me, and swam out beyond the raft of the lake. With the sack tied around my waist, I floated on my back and began to let the air out of my lungs, enveloped in slow motion by the layer of cold water below the surface.

At about 20 feet, the seaweed began to tickle my back, so I pulled out my first air-supply bag, hoping to hold my position by filling my lungs. I breathed in deeply.

My lungs constricted and I gasped for air. I choked on the water, my vision closed in, and I shot to the surface. All was silent, since no one had seen me swim out and no one but me could hear the blood drumming in my ears, my heavy breathing, or the hum of the air — so audible after the underwater quiet.

I sat on the raft and pondered my air-supply bags. I tried breathing from them but there was no air. So I walked back to our cottage and found an attachment to the air mattress foot pump. I attached it to the end of a juice-bag straw and pumped. It worked.

I filled my bag and headed back out beyond the raft. Again, I sank until the seaweed tickled my back, then I pulled out a Capri Sun. It was addictive. I saved more and more juice bags that summer, snuck away more and more often. I didn’t know what I was doing. I just knew that I liked the sparkling sun and the silence.

I often snuck away as a child. I would read books by flashlight in the back of a closet; I would eat lunch in elementary school hidden in a fold of the school theatre’s velvet wings; I would take my leave of a birthday party to find a space between a heavy drape and a large window; I would abandon the bonfire and games to go lie out on an anonymous dark spot of grass and look for satellites in the sky. But sinking into water was different. It was a holy ritual.

In my early 20s I wrote a story about a girl, Catherine, who strayed further and further out into the ocean, staying longer and longer underwater each time. She didn’t know why. It wasn’t like Kate Chopin’s Edna in “The Awakening” or Jack London’s “Martin Eden”; she wasn’t seeking death in the silence. Instead, she sought an alternative form of life. A life without cacophony. A life without gravity.

In my story, the son of the man on the moon falls in love with Catherine and he grows a garden for her on the lunar line between dark and light. He grows poisonous nightshades and lilies and he throws them down toward the girl when her part of the world glides past.

The story ends with Catherine lying underwater in the cold Pacific, looking up at the sun and seeing it eclipsed for a moment. She stares in wonder at what appears to be a tomato tied by a long piece of string to a stargazer lily. She reaches for it, sensing that it’s an invitation to another kind of life.

I no longer take Capri Suns with me swimming. I now wear my scuba gear. I let myself sink on my back, watching my large air bubbles refract and warp the sunlight. Many people have told me how they panic underwater, how it feels claustrophobic and unnatural.

I feel claustrophobic above water, the sounds and chatter, the weight of the world, and of life, the expectations and the scrutiny. Life underwater is silent and suspended, a waking dream sequence in its lack of unfamiliarity. It is like the womb, like a temple, like a living room fort built while home alone on a snow day. It is a space that is palpably inside, alone, sacred.