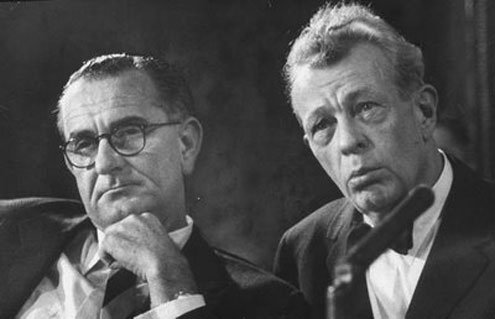 Dirksen, right, with Lyndon Johnson: Flexible at all times.
C

entral to an American boyhood was learning how a bill became a law. Precious to the process was elementary school civics. Each morning we pledged allegiance to God and indivisibility, not knowing much about either but hoping for the best in a time of fallout shelters. Our third grade teacher arranged a visit to the Senate floor after which we were shepherded into gallery from which we looked down on polished wooden aisles. Everyone mooed and murmured (“Quiet, children, please!”) We each carried little white passes and watched without snickering as men spoke grandly and gavels snapped.

My gallery days are revived whenever American government, particularly Congress, plunges into deadlock over money or war, or when I read about episodes of public disagreement that nonchalantly privilege spite.

So mesmerizing was the Senate trip that I went back on my own. I wheedled guest passes and whiled away time on the Capital steps waiting my turn to enter. I once watched a filibuster in which an Illinois Republican named Everett Dirksen, a master craftsman of delay, spoke for hours about faucets and heavenly rainfall — all in an effort to fritter away a bill’s momentum before a critical vote.

While some saw the tactic as frivolous, even reprehensible, nothing mean-spirited transpired. The nastiness instead played out in infamous backrooms whose specific location no one knew. A back room could be urinal or a lawmaker’s living room. As I busied my way up Boy Scout ranks I grew to appreciate government as a highly regimented vaudeville composed of more and less able talkers who occasionally accomplished great things.

I also learned some of the idiosyncrasies of disdain. For example, when one senator addressed a colleague by his title alone, “Senator,” they were friends, or at least allies. Woe betide those addressed as “the honorable…” or “the very honorable…” Each layer of praise worked in reverse.

Political decorum meant getting at enemies in backhanded, non-public ways. Disdain expressed openly not only violated internal protocol but was also seen as an offense to the body politic, which chose to see its representatives, or some of them, as uncles or family doctors. Arrogance rarely lasted long. Nor did demagoguery. Red Baiting Joe McCarthy, the once-unassailble Minnesota senator of the early 1950s, badgered and insulted his way into disgrace. He went from feared anti-Communist to perspiring loon in record time.

Decorum’s onion lost yet another layer in 2010, when South Carolina congressman Joe Wilson — an health care reform skeptic — interrupted President Barack Obama’s State of the Union speech with a shout of “You lie!”

The brazeneness of the breach opened a can of worms that the age of shock and gossip has been loath to repair. “You lie!” deprived decorum of its remaining appetite, putting the American legislature on par with Latin models that delight in spontaneous outbursts (even fistfights) and can’t do without noisy male madams, Italy’s Silvio Berlusconi and Umberto Bossi among them.

With backroom deals out of fashion all quarrels are grossly public. Twitter feeds and Facebook pages ramp up the barkfest, obliterating equanimity and coming to endanger both the value and purpose of compromise. Stubborness is the drama of choice.

Minority Leader Dirksen, a loquacious, witty man, had an inimitable way of making Congress take note of his dissent, sometime stopping it dead in its tracks. But he always took care to avoid character assassination. Decades ago, he offered up a charming piece of ambiguity that reflected the agility of pre-raging bull Congress. “I am a man of fixed and unbending principles,” he said, “the first of which is to be flexible at all times” — a tone that these days sounds positively prehistoric.