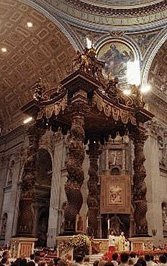 Hard to resist an invitation to a colorful party.
I

believe in a lot of things, but I don’t believe in God. You can call me an atheist by convenience, but it would take a book to describe just what sort of atheist, and in what reverence I hold the workings of the universe. I may write that book for my son, who is, as far as the Vatican is concerned, a Catholic at the age of two.

My husband doesn’t believe either, yet we baptized Alex at four months. Now we have compounded our heresy by checking the “yes” box for religious education on our son’s application for public pre-school. All this might even lead to a first Communion, who knows.

I was taken aback to see that box on the pre-school application. I had heard that children are offered religious education in public schools in Italy, but did not expect the church to intervene on the heels of my child’s potty training.

It seems jarringly at odds with any pretense of separating church and state. There it was, however, the fine print saying that all public schools were required by law to offer “religious” (i.e. Roman Catholic) education to parents who request it. I called my husband on the cell phone for an emergency huddle. We needed a game plan fast.

Fast is not our usual pace on such matters. Deciding to baptize Alex took us nearly a year. My husband and I quickly dismissed the most common, “let him decide when he gets older,” argument against baptism. In practical terms, it is much easier to “decide” once you are already in the church. Conversion requires considerable effort and courage, whereas abstaining from religious proceedings takes only a bit of laziness.

Also weighing in favor of baptism was the very real, social benefit of belonging. In a country where 95 percent of the population is Catholic, where crucifixes hang in most public buildings, where the president (and national moral compass) publicly defends crucifixes in the classroom, baptism is an initiation rite to Italian society and culture. If I had a strong alternative identity to offer — if we were Jewish or Muslim or Hindu — I could rest more easily denying Alex a cornerstone of Italian identity.

But we do not belong to another tradition. My husband’s family is devoutly Catholic. To my husband’s parents, especially, religion is a natural companion to life. My in-laws attend Mass more days than not — my mother-in-law says Mass helps fill the day nicely. The priest is one of my father-in-law’s oldest friends; the two elderly men go great guns talking about church politics. A portrait of Padre Pio keeps my in-laws company in the kitchen, while Jesus watches over them as they sleep. My mother-in-law sometimes uses her rosary, which sits in a tray of knick-knacks, as a bauble to distract infant grandchildren. And they, we knew, cared deeply about Alex receiving the rite.

My family, by contrast, isn’t anything in particular. An irreconcilable cross of scientific atheism and new-age pantheism, the only common ground between my parents was a WASP-ish reticence to take a discernable stand.

One of my grandmother’s last lucid acts before fading into a rosy fog of dementia was to teach her grandchildren the Lord’s Prayer. My brothers were teenagers by then; and I was, I think, 11. I remember feeling grateful. It was a talisman I could use for comfort and an heirloom linking me to the past. But it was not, alas, powerful enough to ward off a profound identity crisis during the arduous emotional labor of growing up. If I could spare my child a similar crisis, I would.

Another feather on the scale was that Alex’s cousins and classmates would have thought the lack of baptism weird. In fact, the unbaptized in Italy must endure years of being different from other children. I had heard about that particular purgatory from Alex’s adolescent cousin. Less than a handful of unbaptized children in her school were left to mope by themselves during religious education or Communion. This may sound like a minor issue, but her vehemence reminded me that such matters are acutely felt.

In essence, there were a number of powerful arguments in favor of baptism, but the spectre loomed of committing an act of hypocrisy. We tried to find out just what we were supposed to avow during the ceremony, but failed. Our friends and my husband’s siblings didn’t remember. We couldn’t ask my husband’s parents, much less a priest, without deep embarrassment. (“We want to baptize our kid but we’re really atheists, you see….”) In the end, we managed to rationalize our way around the obstacles — my husband with lofty (if secular) sentiments, and I with heartfelt pragmatism.

When religious education was sprung on our future 3-year-old, it took a moment for the panic to subside, but having hammered on the issues for so long, our decision was actually a straightforward process. “Ask what they teach and how they teach it,” said my husband, “No doctrine, OK?”

The pre-school director was surprised by the questions but obliged. The local bishop sends out a teacher specially trained in communicating through play. They taught some Bible stories, but mainly emphasized the “Christian family.”

Hairs rose on the back of my neck. I have gay relatives and friends whom I adore and deeply respect.

“Out of each class of twenty-five, I’d say about three.”

I checked the “yes” box.

My husband and I will say that it is important lore with important lessons, that it is his tradition and the basis of Western Civilization. But we will also say Catholic doctrine is not, as the Church maintains, infallible.

In sum, enculturation seems a good bet. After all, you have to master the rules before you can break them well.