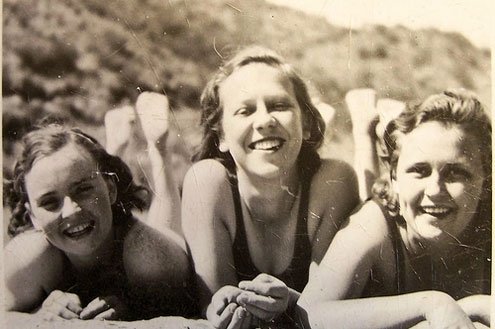 Being her friend felt like coming into my own.
W

e hadn’t spoken for years, but I’d decided to stop by and see her on my trip home this Christmas. I left a message on her phone, and waited.

We met in our first semester in college, two young women barely 19 sitting across from each other in Sociology 101.

Holly had long kinky hair that grew wild and Indian cotton clothes that she wore belted and long. She laughed easy and her smile was contagious. She took pottery classes and spent her spare time throwing clay.

She was my first friend outside of high school. My attraction felt directional, toward the artistic and creative people. Being her friend felt like coming into my own.

It was days before she called me back. Her voice was tired, yet as excitable as I remembered it.

“I’m sorry it’s taken me awhile to get back to you,” she said. “I’m teaching all these art classes and it’s been exhausting. I wrote down when you’re coming to Ohio, and of course I’d love to see you.”

She said all this in one breath, without pausing.

While Holly had stayed on the artist path, I’d become involved in the news business and moved to New York City. I had an office in midtown and spent my days on the computer. She had studio space in her home and a bit of land she called a farm.

“I’d never in my wildest dreams have thought you’d become a big city girl, especially not working in the news business. Don’t you find it so depressing? I never watch the news. I have no idea what’s going on and I get along just fine.”

I laughed to myself. I remembered also saying things like that. I’d add on the uselessness of voting and of buying car insurance. Disengagement from the world was the way I felt progressive and cool.

“I like knowing what’s going on in the world,” I told her. “It’s incredibly fascinating.”

“When I listen to the news,” she said, “I just don’t know whom to believe. Seems everyone is telling lies. It’s like the government. You just can’t trust what you hear.”

I was quiet, and then changed the subject. I asked her about her children, who must be grown up.

“Forest is married and has a daughter who’s three. Sage dropped out of school and moved in with his girlfriend. Laurel is so smart. Not sure who she gets that from, certainly not me. But they’re all out of the house now. We have an empty nest.”

How did that feel, I wanted to know.

“It feels great. Having kids hasn’t been what I hoped it would be; all that time nurturing, sacrificing, and for what? Kids don’t appreciate what you do for them.”

She laughed, but it lacked the spirit I remembered.

“So now it’s just me and Joe. We still get along, though I wish he were someone I could talk to. It’ll be 25 years next month.”

Listening to Holly, I felt far from who I used to be. Would my life be closer to hers had I stayed in Ohio?

“It’s my art that keeps me going. I love to teach my classes. I’ve come to realize I am not teaching technique. It’s not about that. I’m teaching people to walk though their fears, to be less fearful. And in the process, I teach myself the same thing.”

Her art always meant a lot to her and I told her so.

“Thank you so much,” she said. “After all these years, you still get me. I can’t wait to see you.”

Hanging up, I felt a strange uncomfortable dissonance and the divide of the decades. Maybe visiting would be a mistake. But it was too late.

When I managed to pull myself back to the present, I knew there was only one thing to do: I logged on to my computer and read the news.