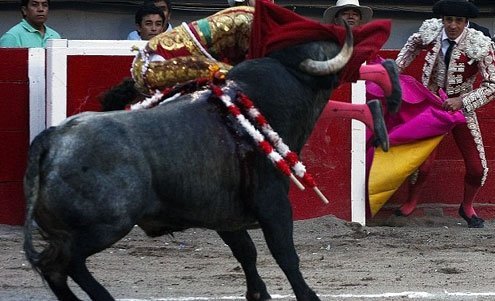 eople say to me, “How lucky you were to see the magical José Tomás in Malaga!” I was lucky, perhaps, but the matador was not. Soon after I saw him, he was gored in the groin and seriously injured during a corrida in the Mexican city of Aguascalientes.

Why am I even thinking of this? My friend in Madrid sent me the video, and I’ll admit, I watched it — all three seconds of horror. The email arrived just as I was working on the tortillita recipe I’d promised in this column. But the video gave me pause to think about how danger can affect not only matadors and fans, but also even those learning to cook.

A cooking student of mine once went pale as I described that we were going to clean and split quail. This involved flattening them with a heavy mallet and roasting them over hot coals.

“I don’t think I can do this,” she said (subtext: poor innocent little quail). That’s fine, except she’d signed up for the menu, which has been spelled out in graphic detail. I try to do that for all my recipes.

She went home, apparently pondered her dilemma, and actually bounced back to gut fish and clean squid. There are all different kinds of courage.

When I cook little green crabs for my soupe de poissons I make sure the broth is roiling, so the tiny creatures die quickly and painlessly. Likewise for lobsters, but they’re tastier by far when split live with a cleaver (a quick, no-pain samurai chop), dipped in melted butter, and dispatched instantly to the grill. Violent stuff, no?

And here was I was, watching José Tomás in his blood-red suit being tossed like a rag doll around the Plaza de Toros until he rolled to the side and was hauled away to relative safety (he lost nearly eight liters of blood).

Is that any different, I asked myself, from watching a chef in Spain toss tiny live shrimp into a batter which is then spooned it hot olive oil to make tortillitas?

I’m not sure, but somehow the end product doesn’t disturb me as much as the ritual cutting off of the ears or tail of the bull.

As a humanitarian cook, I give you a recipe that requires no live creature but tastes just as delicious as tortillitas, made with little, shrimp-like camarones. You can’t find them around here, since the French and Italian governments protect them until they grow up.

When they’re (consenting?) adults, you can haul them out of the water and make gumbo, tempura, pil pil (ah ha, you want to know that one, right?) and curries and have no guilt whatsoever.

I’m sure a plate of these would help speed José’s recovery.

Watch for pil pil next month. After that, it’s all a crêpe shoot.

— If you have any food questions, please write to me at ssdunaway@aol.com.