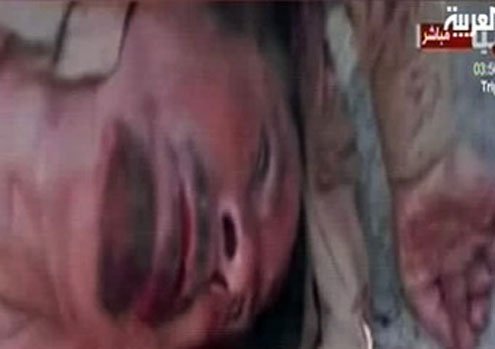 Qaddafi: Dead in Sirte, his hometown.
A

s winter street protests paralyzed Cairo and Hosni Mubarak’s military apparatus appeared to shun him, rumors circulated that the Egyptian president was about to bolt the country for a more hospitable Middle East haven. Critics hoped for such an escape as means to sharpen their portrayal of a despicable opportunist. Since dictators are pitiful creatures by agreed-upon convention, running for their lives helps round out story lines.

But the stubborn and ailing Mubarak stood pat. He was eventually detained by his own officers and now faces the death penalty.

Six months later, Yemeni strongman Ali Abdullah Saleh, badly burned during a June attack on his presidential palace in Sana’a, was whisked off to a hospital in nearby Saudi Arabia for medical care. A wounding, the Purple Heart of opportunism, had fallen into Saleh’s 70-year-old lap. Its only requisite was immobility, which most took for granted.

But in September the bandaged Saleh made an improbable return to Sana’a, nominally if precariously in charge of disintegrating Yemen.

It was no different with the late Moammar Qaddafi. As Tripoli yielded to a patchwork, NATO-backed insurgency, reports had the eccentric colonel sneaking southward, his lavishly privileged family in tow. His public claims that he’d remain in Libya whatever the situation were dismissed as an outrageous eccentric’s patented grandstanding.

Yet Qaddafi kept his word.

Say what you wish about hideous men, but to ignore their quirky ties to nationalism, to patriotism and power, to local tribal roots, to rigor, disdains a bigger picture. Insisting only on the thrilling meat of death — “Wow!” said Hillary Clinton, apprised of Qaddafi’s fate — is to invite bewilderment in the event would-be democrats prove incapable of national management or find themselves forced to step aside in favor of disciplining hard-line forces, whether Islamist or military.

Qaddafi grew up in the geopolitical shadow of Gamal Abdel Nasser, the Egyptian president and pan-Arabist who improbably drove the West to war by nationalizing the Suez Canal in 1956. A Nasser admirer from the start, Qaddafi was a secular schemer who imagined himself as a regional potentate and won over a panicked U.S. Central Intelligence Agency as Egypt tilted toward the Soviet Union following Nasser’s sudden death in 1970.

Qaddafi matured as Nasser repeatedly and often wildly threatened Israel despite the abject failure of the 1967 Six-Day War (“I do not know of such things as semi-military operations. There may be war, but not semi-war,” said Nasser) Two years later, Qaddafi, a 29-year-old officer, came to power in a military coup the United States showed no sign of disliking.

The bravado-prone Qaddafi loathed Nasser’s successor, Anwar Sadat, an abhorrence that would carry over to Mubarak, Sadat’s successor. Seeking common ground between Mao’s personality cult and the eclectic military dicta he’d picked up in England and the Middle East, Qaddafi published “The Green Book,” a slender and often-incomprehensible doctrinal manual that exalted rule by committee and transformed nationhood into an extension of paternal ego in which he was the father.

The disagreeable rest is now history.

Yet Qaddafi remained true to Nasser’s refusal of the semi. Finally pushed out of Tripoli, he sought refuge in his hometown of Sirte, where loyalists protected him until rebels backed by NATO raids proved too much, a predictable outcome of a difference in firepower. Like Saddam Hussein, Qaddafi was chased into rubble and ultimately made rodent-like (he was found injured in a tunnel and very likely executed soon after). Unlike Saddam, he had no American troops to protect him from his vendetta-bound nemeses.

No sustainable defense exists in defense of Qaddafi’s alleged atrocities. But the ethics of patriotism are not always succinctly moral, and in that sense at least he remained patriotically loyal to his vision of Libya. There was no exile. There was no cut-and-run flight à la Idi Amin, who huffed out of Uganda and died in exile in Jeddah, or Jean-Bédel Bokassa, who ran from Central African Republic to suburban Paris and back again. Even Tunisia’s forgotten Zine Abedine Ben Ali, a longtime president banished in January, still clings to life in Saudi Arabia, with news of his status scarce at best.

While the West (and now the Middle East) is entitled to resent the die-hard tyrannies represented by Mubarak, Qaddafi and Saleh (Syria’s Bashar al-Assad also fits the mold), all took (and take) seriously a brawny megalomania that puts state and self on heroic par, making ouster by force far more likely than nighttime escapes. Qaddafi repeatedly refused offers to surrender or “retire.”

The transitional government’s announcement of his Qaddafi’s death had Stalinist diction: “We announce to the world that Qaddafi has been killed at the hands of the revolution. It is an historic moment. It is the end of tyranny and dictatorship. Qaddafi has met his fate.”

More to the underlying point was a Nasser remark, which Colonel Qaddafi, who never promoted himself to general, swore by: “What was taken by force, can only be restored by force.”

Whatever emerges from the study of his character and legacy — likely to endure righteous pillorying in the coming weeks, months and years — it’s worthwhile noting that he chose to walk away from walking away, meeting fate straight up, on his own turf and terms, a Kamikaze without a midnight flight in sight.