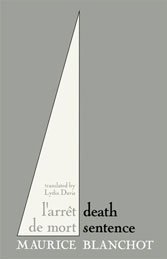 By Maurice Blanchot, translated from the French by Lydia Davis

French writer and philosopher Maurice Blanchot (1907-2003), little known in North America, was among the few writers ever to successfully X-ray the hallucinatory process that is the act of writing and the improbable, trance-like undertaking that is the invention of characters. Written in 1948, this is a one-of-a-kind exercise that challenges the assumptions built into writing and conventional reality. Blanchot doesn’t so much shatter the conventional reliable-versus-unreliable narrator debate as probe the details of what a writer does when he creates a fictitious personage.

His story, he says, is real, and occurred in 1938. Its first part involves a woman called J., who lives, is loved by the narrator, grows ill, and dies, but apparently refuses her own death because the writer won’t allow it, demanding instead that she behave exceptionally — “… this young woman was dead, and returned to life at my bidding.”

Enter Natalie, who the vagrant writer meets during the war in Paris. She, too, straddles the border between actual lover and figment, existing to suit the writer’s words. She is an assertion that causes both joy and pain. These are not abstract literary games, at least not in the hands of Blanchot: they are the ephemera of a narrative that come to life because the author wills it to, “educating” that will despite the inherently painful process. Blanchot is the teller of the “speaking solitude”; he is the raconteur of the “sadness on the other side of the wall.” He is the launcher of what amounts to a deep space probe.

Of Natalie, he writes: “She remained in my presence with the freedom of a thought. She was in this world, but I was encountering her again in this world only because she was my thought…” The relationship between the writer and his thought reflect a “terrifying complicity” that resists — or freezes — death, and is at the essence of all writing creation. Blanchot gets to this in a reasoned, hard, even pragmatic way; a Gallic approach to the devotional mystery of writing that is as complex as the more magically inclined South Americans. Lydia Davis’ translation is attentive to each word, and the whole exists outside genre, a tribute to anyone who seeks to understand the transcendent sovereignty of the imagination.