Death of a C Cup 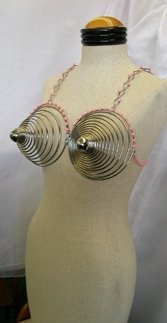 Remodeling is not an option.
S

adly, my husband and I attended a funeral last week. For my breasts. After years of healthy, robust living and 13 months of lactating they were deflated and lifeless. My breasts had died.

Marco came in to the bathroom. I had just showered.

He gasped so audibly that I jumped.

“What happened?” he said shocked.

“Your breasts? They aren’t… What happened?” he repeated.

Son “Oedipus” and I had just come back from over a month in the U.S. where by way of video conferencing I had explained on numerous occasions that “the girls” had disappeared like the Baltimore Colts in the middle of the night. I had also spent 200 greenbacks at Nordstrom’s for three padded push up bras. Size: A. When we spoke he had sloughed it off as nonsense, but now face-to-face with the missing members of the team… Marco and I mourned together.

And so it is with great sorrow that I salute my mammillary amicas this week with a eulogy fit for the C cup sisters that they were. Here goes:

They were born when I was, but blossomed in 1982 and bloomed in 1987 with the help of their friend progesterone (i.e. birth control pills). They were round, perky and my B cup runneth over (hence the C). While they didn’t attract the attention my younger sister’s double D cups did, they were more or less pleased with their lot.

After graduating from high school, they attended the University of Maryland where they were very much appreciated by my geeky Math teaching assistant — a non-Asian bearded guy by the name of Bill. In an unlikely twist of debauchery, they wanted to enter a wet t-shirt contest during my sophomore year spring break, but I wouldn’t allow it. To this day I regret not letting them have their place in the sun (Florida was super dry that year). After college, they went on to study acting in New York at the American Academy of Dramatic Arts where they met several transsexuals who greatly admired their ample lines. One even asked if he/she could take a Polaroid for a post-op procedure. In 1995, they were a Park Avenue plastic surgeon’s pectoral muse.

In short, the girls were appreciated in their youth.

By the time they reached 30, they grew a bit more pragmatic and utilitarian. Plus, in 2001 the left one had sustained serious injuries involving the corner of a stereo cabinet that ended in stitches a golf ball sized contusion. Los Angeles is a dangerous place for the natural bosom set. But I digress.

It would be remiss to say that by this time they didn’t look tired or that their posture hadn’t waned. They had clearly seen better days. However, moving to Italy at age 33 put a new spring in their middle-aged steps. They often cruised the Mediterranean senza bikini top. Their areola’s enjoyed this southern exposure for a while but then experienced some premature aging due to sun damage. Though the girls were enjoying their life of leisure, they knew it would soon be time to do something of substance. Something they had never before: work full time.

In the fall of 2006, with a pregnant body behind them, they began to step up to the plate. Producing milk in 2007 became not just a job… but a passion. Especially for the right one. What a worker bee that one was (the left one was more like the brains of the operation)! In fact, their supply was so abundant that they were actually able to donate milk to the local bank here in Rome thus helping other babies whose mother’s were not nearly as “liquid.” Up until they end, they were proud of their charitable contributions. As their work continued, sadly, it was not met without difficulty in that they experienced mastitis a remarkable nine times. Ouch. But even in the face of, or breast of, adversity, the twins trudged forward in their dietary mission. So it was with great satisfaction and pride, that they solely sustained little Oedipus for six months and helped him grow for a total of 13 months — a career longevity that rivals many a lactating specialist and some B movie actresses.

On May 29, 2008, they hung up their breast pumps and mammary glands for good and four weeks later they ceased to exist. And while their time here on earth was cut short; they made their mark. They served their purpose. We could take solace in knowing that they are now resting in a better place… but I don’t think anyone believes that boobs pass over to any afterlife of any kind. So this is just plain sad.

They are survived by me, Marco and little Oedi. They will be missed.

Note: I contacted the La Leche League to ask about bereavement counseling. They hung up on me.