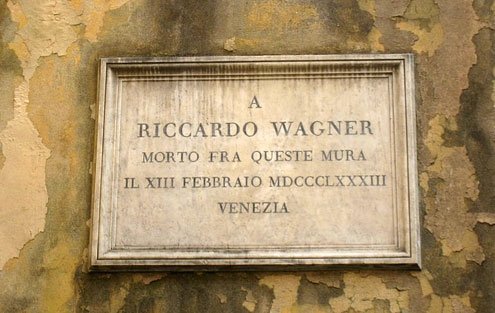 Plaque dedicated to Wagner on Venice's Palazzo Vendramin Calergi, where he died in 1883.
O

n Christmas Eve 1882, German composer Richard Wagner gave the final performance of his life at Venice’s Teatro La Fenice. The Leipzig-born maestro gathered his family inside the gilded Sale Apollinee to hear his lone symphony, penned when he was just 19. The score to “Symphony in C major,” long thought lost, was unearthed in a trunk the composer had left in Dresden.

Wagner had prepared the Venice concert for his wife’s 45th birthday. She was Cosima Liszt, daughter of celebrated Hungarian composer Franz Liszt, who came to La Fenice with Wagners’ four children. Wagner himself led the first two movements before passing the baton to Engelbert Humperdink, his protégé from Bayreuth, the Bavarian town where Wagnerites still flock to hear exclusive performances of his epic operas.

Two days before the birthday concert, during a rehearsal with an orchestra comprised of Venice Conservatory students and professors, the 69-year-old Wagner had suffered a heart attack, one of many in his later life. Wagner had long been afflicted by angina, a condition that exacerbated his burgeoning obsession with death.

Visiting Venice in the spring of 1882, he confided to Cosima that he’d like to die Venice. He got his wish less than a year later, just weeks after the La Fenice concert, slipping away in her arms in his bedroom at the Palazzo Vendramin Calergi, a Renaissance palace overlooking the Grand Canal.

In all, Wagner made six trips Italy, arriving for the first time on Aug. 29, 1858 and staying seven months. “Venice is a far off world of other times so deeply in harmony with my own desire for solitude,” he rhapsodized in a diary he kept for his alleged mistress, Mathilde Wesendoncks. “Nothing here has the immediacy of real life. Everything here suggests a work of art. Stay here I shall.”

Venice became a personal and creative refuge from an otherwise tumultuous personal life. Wagner’s 1858 visit came during a 12-year Swiss exile caused by his participation in the 1849 Dresden Uprising, a violent anti-monarchist revolt. It was in Zurich that Wagner grew infatuated with Wesendoncks, the wife of his wealthy Swiss patron Otto Wesendoncks. When Wagner’s first wife Minna intercepted a Mathilde-bound love letter, Wagner fled south to Venice.

Such incidents were characteristic of Wagner’s messy private life. Revered as the progenitor of modern classical music and triumphal, epic operas, including “The Ring of Nibelung,” “Tristan and Isolde” and “Parsifal,” Wagner’s prodigious genius was often overshadowed by his dubious sense of ethics. Arrogance, deceitfulness, adultery, misogyny, debt-dodging and visceral anti-Semitism all feature in his legacy (a1850 essay “Jewry in Music” was particularly vicious). Adolph Hitler further sullied Wagner’s place in history by using his music to exalt the Third Reich. Hitler’s Nuremberg Rallies began with Wagner’s “Meistersinger.” Worse still, Dachau sonic torture included the loud playing of Wagner works.

In Venice, Wagner was always transformed if not reignited. The 1858 trip produced the second act of “Tristan,” while an 1861 visit led to an entire opera. “I must confess that the ‘Assumption of the Virgin’ by Titian exercised a most sublime influence over me,” Wagner wrote of his visit to the Gallerie dell’Accademia in “My Life,” his autobiography. “I determined at once on the composition of the ‘Meistersinger.'”

In September 1876, Wagner traveled to Bologna with his family, where he was named an honorary burgess. He proceeded to Naples, where he settled in for the winter in picturesque Sorrento. There, he met friend-turned-nemesis, German philosopher Friedrich Nietzsche, for the last time. Originally brought together by a mutual appreciation of Arthur Schopenhauer, the pair quarreled over the philosopher’s vision and drifted apart.

Wagner completed his final opera, “Parsifal,” while staying at Palermo’s Hotel des Palmas in winter of 1881. Painter (and impassioned fan) Pierre-Auguste Renoir called on him there, sketching his portrait in a mere 35 minutes. “If I had stopped sooner it would have been better, because my model ended up by losing some of his good humor, and he became stiff,” Renoir wrote to a friend. “I followed these changes too closely… At the end Wagner asked to see it. He said, ‘Ah! Ah! It’s true that I look like a Protestant minister.'”

On Feb. 13, 1883, less than two months after the Christmas Eve performance, Wagner suffered his lethal heart attack. Afterwards, his body began its journey to Bayreuth as part of a melancholic funeral procession through the canals, just what Liszt had seen. Of Venice, Wagner once wrote: “Only silence remains profound in this city saved from overgrowth, where the roads are canals and the quiet splash of oars is all that interrupts the silence.”