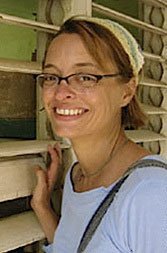 was sitting in the Beirut airport when I glanced passed a headline on Google News about the recovered body of a missing American Peace Corps worker in the Philippines. It was very early in the morning and I hadn’t slept properly in almost 24 hours. My eye caught the last name and the photo.

It took a moment to process the information: that’s Julia.

Julia Campbell had been teaching in the Philippines for almost two years when she decided to take a hike, alone, in a remote and by all accounts beautiful region of the country. I knew Julia many years ago in New York. She was my editor for several months at Foxnews.com. I had heard enough horror stories of interns functioning as slaves and coffee boys; but Julia treated me like a full staff member, giving me assignments and allowing me to sit in on the weekly reporters’ pitch meetings, eventually promoting me to full-time reporter even though I had one more semester of grad school to complete. Then she left. It was only a month or so after the Nasdaq crash of April 2000, and all of the good editors were fleeing. Rupert Murdoch sent in the hard-line corporate cleaners and in a few months the entire office would close down and all operations would be handled at the corporate News Channel offices in Midtown.

I liked Julia — she was smart, sincere and tough — but I didn’t know her well outside of the office, and we didn’t keep in touch save for a few emails after I graduated. After reading of her death, my first thought — and one I hoped wasn’t true — was that she was killed by a local because she was alone. Because she was a woman. My next thought was something darker.

I started thinking about traveling, and the reasons that we push ourselves into sometimes dangerous situations. Living in Rome, with its heavy presence of international NGOs plus the natural propensity for wanderlust that lies in any expatriate community, it’s inevitable that you commingle with a community of seasoned travelers. I’m frequently mucking about the Middle East, mainly Saudi Arabia, Lebanon and Jordan. Most people back in the States believe this is dangerous and perhaps even foolish. I do not.

When I was a young child my mother bought me a globe. It was a very cool globe, with mountains rising up from the surface and intricate color patterns to indicate jungles and deserts and arctic regions. I used to close my eyes and spin the globe really fast, dragging the tip of my finger across to stop the world. Then I would daydream about those places where my finger stuck. My mother still reminds me that one of my earliest professional goals, as yet unrealized, was to become a yak herder in Tibet.

A long time ago I made a decision that I needed to see the world from different angles. To me, there is something comforting about motion. Repetition depresses me. I am restless.

Travel in its purest form, I believe, is a pursuit of knowledge, both of the world and of oneself. Travel is a way to challenge and redefine personal and social and physical boundaries, to overcome fears and to eradicate some of the prejudices that surround us. Travel is experience, and experience is legitimacy. In the end, no one can take that away.

But how far is too far? When are the prejudices justified and meant to be heeded? When does the pursuit of what we seek turn on us and destroy us, the thing that is sought haven taken on greater importance than our bodies, our lives? At what point are we being inexcusably selfish in our cavalier ways, forgetting that our lives are never completely our own but are inexorably tied into the lives of our parents, partners and children.

Julia was a journalist, and these are the questions that the best journalists, aid workers, soldiers, explorers… all true travelers… confront on a daily basis. The answers to these questions shape us and determine how we live our life.

The day after I read about Julia’s death I met two men in a pub in Amman. I had been talking to an ex-British soldier from Northern Ireland who was a private intelligence consultant in Iraq and Afghanistan. He bumped into one of his mates, an Englishman who was with a drunken crew about to go back into Iraq. It was clear they were old friends in the way that two people who have seen some serious shit were old friends. The Brit was an articulate, good looking guy with a deceptively gentle face, the kind of guy you might want your sister to bring home. But underneath the surface there was a constrained and dangerous severity.

The Englishman was not a consultant, he was a PSD (personal security detail) — a catchy euphemism for a mercenary. His job is to drive heavily armed SUVs into bad places. Everyday that he goes to work people want to kill him; and one day soon they will try. He knows this.

Despite this, he loves his job, he said. The pay is outstanding, but it’s not about the pay. He doesn’t crave the adrenaline rush, he enjoys the responsibility; and more than that, most of all, he said, he loves the guys he works with. He loves the camaraderie.

When I asked him bluntly about death, he fired back a canned response: “it all comes down to fate.” I thought for a moment and I looked at him and I knew he didn’t believe that.

“No,” I said, “it comes down to decisions and knowing the potential consequences of those decisions. You make a choice and you know the dangers and you do it anyway because you want to.”

Considering the thought, he smiled, as if I had just helped him find the words for something he’s long mulled over. “You’re right,” he said. “I think that’s the definition of professionalism.”

— Julia Campbell kept a blog until her death, which is still under investigation. Her body was found in a shallow grave days after she went hiking on Easter Sunday near Batad in the northern Philippines.