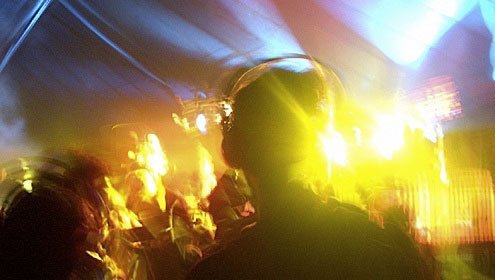 Waiting is the “thing,” he explained. It had been ages since Fabio and I had been to a club.
W

hen you reach a certain age (29 in my case), you start noticing differences in lifestyles between you and your friends. The same people with whom you crammed for all-nighters and watched high school football games suddenly become complete strangers. Though the natural course of life takes people in separate directions, there are moments when you ask: “When did we become so different?”

Take my best friend in Miami. She recently married Fabio’s cousin and even more recently gave birth to her first baby. As we chatted by phone recently (we hadn’t had a real conversation in months because of her pregnancy and busy schedule) she began confiding the gory details of giving birth.

I’ll spare you the play-by-play. Excerpt (spoken nonchalantly): “So, I pushed for about an hour and a half and when I was through, the doctor had to sew me back up down there.”

“So what’s up with you?” she asked. As I began talking about our summer plans, I realized how trivial it might sound to someone who had just suffered through gruesome labor and was taking advantage of a few available minutes to come up for air.

“Well,” I said, “Fabio and I are heading off to Spain for 10 days where my friend has a house on the beach… blah, blah, blah…”

Half way through the conversation, my voice trailed off. I knew I’d lost her attention.

“Nicole, I’m sorry,” she said, the baby wailing in the background, “I’m going to have to call you back. I have to go breastfeed the baby.”

And there it was.

Change had hit us in a big way. What used to be girl talk had become baby talk. As interested as I was in the subject, I couldn’t help but think she was speaking a foreign language.

Fabio had a similar experience on our recent trip to London. We stayed with a friend and colleague who’d been living and working abroad for years. Fabio and Peppe are college friends who studied dentistry together. While they’re the same age, from the same region (Calabria) and worked in Fabio’s same profession, their lifestyles have become deeply different — something that was suddenly apparent.

Peppe, who is single, has two Italian roommates also in their mid-thirties, living and working in London. On our first night, Fabio’s friend and roommates took us out to a hip club where waited in line for half-an- hour in the cold drizzle.

Though we were on the “list,” his friend told us that in London everyone waits. Waiting is the “thing,” he explained. It had been ages since Fabio and I had been to a club. Waiting in line as we do almost daily in Rome (the post office, supermarket, bank, etc.) was hardly the highlight of a night out.

Second night, a similar story. This time, we were in the VIP section of an exclusive London disco. After negotiating the line, we managed to get into the “smoky” disco and rubbed shoulders with (Peppe said) London’s finest. Finest what, I wasn’t sure. Fabio’s dance moves gave away his mood. One twitching shoulder meant he was bored.

As 3 a.m. rolled around, we made our way out to look for a cab. Peppe, tipsy at this point, walked past an eye-catching girl. He turned to Fabio and slurred, “Ammazza, did you see how beautiful she was, Fabio?”

It may have been that Fabio was concentrating on finding a cab or that he actually noticed the girl and decided to take a gentleman’s approach, but he just shrugged and shook his head. This didn’t go over well with Peppe. “I know you’re engaged, Fabio,” he said. “But you could at least look at one girl. One girl. Gosh!”

No taxi in sight we hopped on the night bus. Fabio hadn’t complained the entire weekend. The rain, the lines, smoky discos, not even Peppe’s out-of-line comment seemed to phase him.

But the bus was another story. “I’m too old for this,” he said.

We’re too old for this.