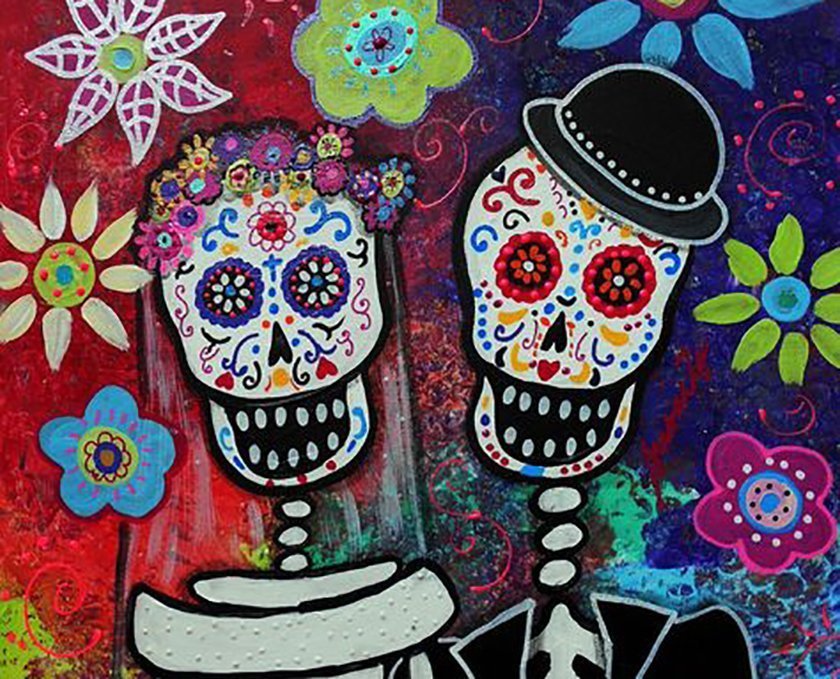 Death be not proud. Who says? And why?
I

tend to think a lot about death. I find it cruel to picture her as a scary skeleton waving a reaper. Nothing gives me more pleasure, nothing makes me feel more at peace, than the idea that I will die one day. It’s a warm blanket on a cold night, a glass of steaming vanilla milk on a sleepless one. It’s an assurance that one day I will suffer no more.

It’s the only thing in the world I am not scared of. Death is a mother. A loving mother who takes a child in her arms, plants a kiss on her forehead, and whispers, “Don’t worry, it’s all going to be fine.”

Life is a spoiled diva who’s never fully satisfied with anything.

It’s the absolute opposition of life. Life is egocentric and dramatic. It is a spoiled diva who’s never fully satisfied with anything. Life is tricky, moody, and chimeric. It cannot be trusted, and you can be sure that at one point or another it will toss you into some sort of horrific labyrinth. It’s like the evil Chucky doll you know you shouldn’t be playing with, but you can’t help yourself. It’s poison ivy that you can’t just shake off once its green claws sink in. We’re told by many that life is a gift and I’m always amused how people are overwhelmed with happiness when a new life is born. They laugh as if they’d been presented with a suitcase full of money. The only thing I can think of is the pain of the baby and the future stress of its parents. Scientists say that the pain of taking your first breath is among the most psychically traumatizing experience of a human lifetime. It’s a gasp, a short torture we forget too easily because we’re too young to record it.

We emerge from a safe and watery cocoon after which the pain begins. And it only gets worse — teething, bullying, heartbreaks, not enough Facebook friends, trying to make ends meet, romance unto divorce, and then a slow decay that ends in painful death.

If you’re a bit lucky your life is a constant thunder and lighting, thrills included, but more often than not it’s just grayness with sporadic outbreaks of sunshine. Sometimes a moment of joy is so unexpected and overwhelming you happily let yourself get sunburned.

But yet we live. Mostly, though, we charge ahead, pausing to mourn if someone dies. I’ve had a few such moments of grief, but inside I was actually pleased for the people who’d passed. My father died in unclear circumstances. He crashed his car into a tree. To this day I cannot be sure whether it was his poor driving or perhaps suicide. The last time I saw him, he was suffering from deep depression, so I wouldn’t be too surprised if he decided to take his own life.

I still remember him clearly, sitting in a kitchen, all skin and bones, smoking cheap cigarettes. He told me about betrayals, darkness and life-dashing sadness. He told me things I probably should not have heard. His existence was a life lesson, alien to what we see now on Instagram. The accident happened on my birthday. Oh, life is such a friend, no?

Just two weeks before my father’s death, I had to face another tragedy. My beloved grandmother on my mother’s side died of cancer. When death finally kissed her, she was no more than an outline of a human being. Cancer crippled her in an unimaginable way and in the course of a few months she became the dictionary definition of pain.

Cancer crippled her and in the course of a few months she became the dictionary definition of pain.

And I watched it happen. Every time I visited her I convinced myself something would change for the better, that I would get my old and chubby grandma back, so filled with life and laughter. I visited her every week, but she only occasionally reacted to my presence. Most of the time I wasn’t there, not in her cancer-cooled mind.

One day I decided to buy some apples and bring them to her. How naïve. I thought vitamins would make her feel better. My grandma in her pampers carried the weight of a skinny teenager and could do little more than moan.

When I left her house I thought: what a cruel, cruel system we’ve created. She should have been already dead, why wasn’t she? Why did we keep grandma alive? Why did we let her suffer?

Most civilized countries sill don’t allow euthanasia. On a short list of those with a better-defined sense of morality are Switzerland, The Netherlands, Belgium, Luxembourg, Colombia, and Canada. It is also legal in some parts of Australia and a few American states.

But the list is a joke considering how many rich and highly developed countries exist. In my native Poland, euthanasia is openly called murder. But let’s leave Poland out of it — it’s a third world country, anyway. What about Germany, France, Scandinavia? We are apparently led by politicians who prefer to leave people to their own despair until their final heartbeat.

Belgium, for example, was the first country in the world to allow euthanasia for children. Holland has begun assisting people struggling with mental illness who want a way out. It’s a sign of progress. It’s a hope that not all of us will end up jumping off bridges or disturbing local commuter trains.

We can die in peace, surrounded by the ones we love.

But it all starts with education. Life must be presented as painful as it really is, and death as the only antidote to it. Nothing to fear, something to desire. Acknowledging this would certainly make us a more dignified species.

For now we are no better than mice, mice that by pure chance managed to build the Sistine Chapel. Nothing, frankly, to get too excited about.