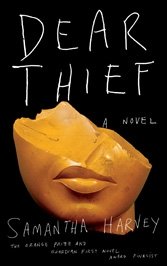 On December 26, 2001, Boxing Day, Samantha Harvey’s unnamed narrator, a 52-year-old British woman, begins a hand-written letter to her lifelong friend Nina, muse and marriage-wrecker, aggregator of life themes, a phosphorescent enigma who has been in the wind for more than 15 years and whose last communication suggested she was in Lithuania, the country of her parents’ origin, in a “desert” more symbolic than real. Over months, the epistle is transformed into luminously observant hymn that focuses of discovery, loss, jealousy, regret, affection, faith (Hindu scripture plays a large role), and an awareness – once shared by the old-soul childhood friends – that disappointment, conspiring as it does with aging, is written into every human script: “Life shoots you a lethal dose of time.” This is not a “sending” letter but a gesture of remembering, the accounting for and the summing up an unusual relationship (“the battle between us…”) whose inactivity (“…intimacy is a form of distance”) makes recollection into reckoning, sketchy memories become fact to suit the greedy needs of the now.

Though the secondary characters — the narrator’s husband Nicholas, her now twenty-something son Teddy, her shopkeeper friend Yannis, and the patients in the London care home where the narrator works – help grease the wheels, the muse of the whole is Nina, or “Butterfly,” a richly textured goddess of self-indulgence and melancholy, a “one-woman nation state” who did things her way, heroin addiction included. Despite the martial damage done, the narrator siphons energy from her vanished friend, this thief who inserted herself into a critical juncture of life and came away with a range of experiences and feelings that those in her long wake, particularly the logical, contemplative, believe they can never rival. Though the narrator insists she seeks to resist “the seduction of memory and metaphors,” but doesn’t really resist at all, and the prose is its own seduction (days do not pass on their own, they are “hunted down,” and “the mind is a bad loser.”) Harvey has an uncanny sense of the limitations of maturity and the mechanisms of adult self-deception. Her ability to flesh out Nina and borrow intimacy and tension through absence is tender, urgent, even thrilling. “We encroach on one other, be it painfully or pleasurably, we encroach and run into each other, and this is what we know fondly or otherwise as life.” This is book about the philosophical vicissitudes of human encroachment. It is also a celebration of what Harvey has called “the slow old letter… a sort of considered performance of best self.” Here, and throughout, that best self is front and center and beautiful.