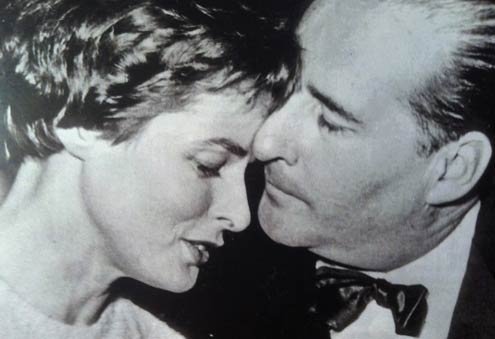 friend of mine who is a beautiful woman makes me wonder what happened to beautiful women. Not hotties. Not babes. Not even the broads of another time. Where in the wounded world of language has beautiful gone off to die?

Traces remain of it remain if the subject is art, though what’s seen as impressive is often not called beautiful but cool, which modifies both temperature and approach. It’s hard to call the “Mona Lisa” cool, but many do. It’s the default position of all verbal applause.

But back to women: In her day, Ingrid Bergman was “a looker,” yes, but also beautiful. Which made her eloping with an Italian director all the more scandalous, if not unexpected. Italian men — in this case director Roberto Rossellini — wooed beautiful women, and it hardly mattered that both Bergman and Rossellini were married. Their 1951 coupling didn’t go over well at a time when bishops still made breaking news and the Catholic Church dictated social norms (it still does, but less comprehensively).

Marilyn Monroe was “drop-dead gorgeous,” also a “sexpot,” a “dish,” a “babe,” a “looker,” a walking totality of leering slang. But she was also often called beautiful. Joe DiMaggio said so. So did Arthur Miller. So did a host of (male run) newspapers that referred to her as a “beautiful starlet” to dodge the vulgar vagaries of temperature-tinted language. Speakers and writers didn’t — couldn’t — trivialize what amounted to a national treasure. They could maybe do so in mind, and among buddies, but not in polite conversation. Linguistic deference mattered.

Marlene Dietrich was a “temptress,” even a vixen, but always beautiful. The vixen part was a nod to vanity, exoticism and unavailability, the “common man” troika. The most desirable women were those least likely to ever graze the orbit of an American any-guy. Most were actresses, which made them worldly by definition, as well as the magical offspring of (silver) screens, fantastic gifts that lascivious testosterone could salivate over but never possess.

Jessica Lange in her breakthrough years was another sexy, sultry woman. The New York Times was unsettled by her “dangerous sexuality” (when is it not?), but she was still a “luminous beauty.” The same held for French actress Isabelle Adjani, who made the cover of Time Magazine in 1977 as arguably the most beautiful woman in the world. What the two women were not — or were but it went unstated — was hot. Like Catherine Deneuve, they were simply too beautiful.

The spoken value of the word beautiful was in the way it forced a gap between animal attraction, invariably sexual, and a wider social appreciation that included a love of poise. It represented separation between adolescence and adulthood, which has since flowed in reverse. Calling a woman beautiful didn’t diminish male lust but framed remoteness in a world where courtship stood out as a necessary preamble to more literal hotness.

That framing process has vanished. Angelina Jolie, another beautiful woman, is hotter than she is beautiful, or, nearing 40, “still hot.” The only component is the ebb and flow of desirability. Pretty yields to cute which leads to hot which leads to totally hot or smokin’ hot, and forward into any number one-size-fits-all sexual furnaces.

But hotness also dispenses with wonderment, which puts beauty at risk. Few were the men able to come close to beauty; many are the men who now fantasize over, and even get, hotness, or a cut-and-paste commodity version prefabricated to suit established mating calls. Hot women are cool to be around, awesome even. If only awe still contained beauty, and style, which it doesn’t.

A final word on Rossellini and Bergman: The Swedish actress was already widely acclaimed by the time she stumbled onto Rossellini’s neorealist efforts. Interested in him at any number of levels, she wrote him a letter in 1948, its language a time capsule ode to discernment, and flirting:

I saw your films “Open City” and “Paisan,” and enjoyed them very much. If you need a Swedish actress who speaks English very well, who has not forgotten her German, who is not very understandable in French, and who in Italian knows only “ti amo,” I am ready to come and make a film with you.

The two ended up making considerably more than a film, in the process doing a great deal that was hot but none of it ever in need of so lifeless a word.