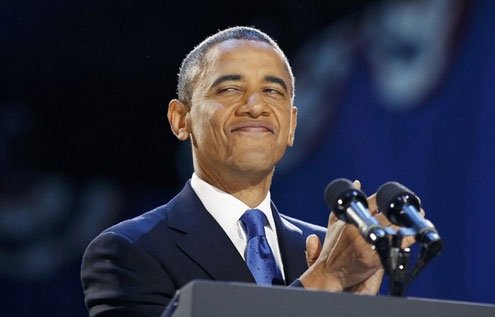 You are the leader of the free world, for Chrissakes.
D

ear Mr. President: I am greeting you formally as I prefer a little distance between the Commander-in-Chief and myself. Throughout the last year, approximately seven-to-eight times per day, you or one of your cronies (I mean advisers) has referred to me as “Friend” in an email. Sir, this is a bit too forward for me.

While I thought about sending you to spam, or reporting you for Internet stalking, I didn’t. I like you. But just because I give you 25 bucks every once in while doesn’t mean that I should be entitled to dine with you, Sarah Jessica or Beyonce — or that I should have any kind of social access to you. You’re the leader of the free world, for Chrissakes. You’ve got a job to do, and so do I. What do you say we keep it strictly professional?

You are the president of the United States, and will be again for the next four years, and I am raising two young boys who might become president one day. Both are 24/7 positions that can be tricky. But unlike you, I don’t have a two-term limit and there’s not a snowball’s chance in hell of some Mormon coming in to finish my job.

That said, I really think it’s time for you to start acting presidential again. No more cutesy emails, no more attention to pop culture.

And don’t worry, I realize you had to play this way to keep the White House. I don’t “hate the player, I hate the game.” But now it’s time to straighten out your pencil holder, roll your sleeves up, and get to work in the Oval Office.

Like me, you’ve got a lot of messes to clean up. Admittedly, I didn’t inherit my messes from a smarmy Republican who barely got through Yale. (Two preschoolers instead created mine.) But just like you, Mr. President, I find myself in a sticky situation. In fact, my entire house is sticky. There are lollipop handprints smeared on the walls and bananas smudged on the love-seat. I have quite a job ahead of me (and that doesn’t even include the laundry). And so do you.

I know it can be overwhelming. Everyone looks to you to put out fires and make things right. I get it. But when my kids act like rabid little constituents I know to use a few tricks I’ve developed to help myself calm down before I get down to business.

One. Yoga. You should totally try this, Mr. President. I’m thinking you’re an Ashtanga kind of guy. Forget what anyone’s told you about Bikram. The injury risk is high and we can’t afford you becoming a physically lame duck president.

Two. Call a friend and vent. Possibly Arianna Huffington or Jay Z. Tell them how you really feel about bipartisan politics and complaining constituents. While doing this, take deep, cleansing breaths.

Three. Open a bottle of Sangiovese, pour yourself a glass, and lock yourself in the bathroom so your children — sorry, I meant the free world — can’t find you.

Note: Mrs. Obama can also use Number three when she’s dealing with the conservatives who mock her efforts to build up healthy dietary habits in children.

Now then, after you’ve picked yourself up and dusted yourself off, the cleanup has to begin. Think of the United States as a dirty kitchen. First, eliminate all soiled dishes. This is easy because it’s obvious. I would liken this to human rights and equality. It just makes sense. Throw the stuff in the dishwasher, let homosexuals get married, and continue letting women be able to control their reproductive rights. Done, done and done.

Then start with the countertops. Think of these as your economy. They are super important — they’re your work surface. Your kitchen (or country) cannot operate unless they’re clean and orderly.

Next, scrub down your appliances, ensuring they operate properly and efficiently (like your military). Questions you can ask yourself include: Where should we be putting our military efforts? Are we properly defending ourselves? Is a trash compactor or a droid a good allocation of funds and energy?

When you’re done with appliances, move on to the cabinets. Wipe them down. Check in with your cabinet chiefs. Is Hillary going to stick around? Does anyone else need to be replaced? Shuffled?

After the cabinets, clean out the sink — where bacteria often lurks. Think of the sink as Congress. There’s a lot of slime in there. It is fundamental that the basin be clean. Deep dirt sometimes calls for something more abrasive. You might want to consider that when trying to get legislation passed.

Last but not least, sweep and mop your floors. This is something that requires labor. Think jobs. Jobs for technology, jobs in science, jobs in manufacturing, jobs for the environment, jobs for a new generation. Steve Jobs. Kidding.

Once you’ve cleaned up the kitchen, you can move on to different rooms, tackling them section-by-section. Doing it this way makes the tasks at hand seem less daunting. Your bathroom can represent healthcare, taxes and election reform. Your guest room? Immigration. Duh! Tidy up all those areas and you’ll certainly earn the respect a clean house deserves.

There it is, my professional advice. Take it or leave it. Good luck. And if you have any ideas on how to get permanent magic marker off my down duvet, please hit me up on my twitter account.