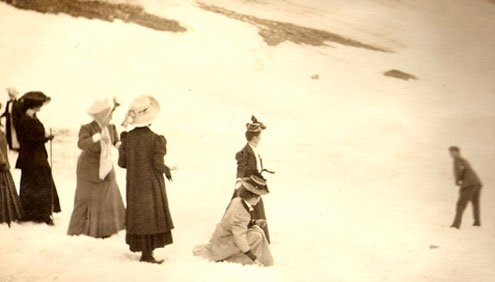 oday was too rainy for yard work, so I rummaged through several steamer trunks worth of family letters, albums and academic miscellany. They trace the path of a busy thoughtful family along the crucial arc of American history from the Civil War through World War II.

There are hundreds of postcards and a collection of passports. In 1908, the U.S. passport was poster-size sheet filled out by hand with no photo. The one from 1941 has a photo and is stamped “Travel in Europe forbidden.” A profusion of letters bear colorful stamps and logos from Shepheard’s Hotel in Cairo, the Grande Bretagne in Athens and long-lost pensioni from all over. Black-paged photo albums record a summer snowball fight on the Eiger, a cow being milked on a Naples street and smiling travelers in boaters or dusters and goggles for motoring.

It began with my great grandfather. After the University of Kansas, he went to Tübingen, Germany to study chemistry. Germany was at the forefront of science and his professor Lothar Meyer was one of the era’s greats.

In 1908, after graduating from the University of Chicago, my grandfather and his mother took a European and Mediterranean tour. When he finished law school in 1912, grandfather set off alone for a bicycle tour of France and Germany. Along the way he saved timetables, membership cards from French and German bicycle associations, concert programs and guidebooks — one of Berlin’s Reichstag (pre-burning) — and expense records.

In 1911 Uncle Lothar (named for the professor), went to China with the Marines, via Hawaii and the Philippines. He too was a keeper of memorabilia. His albums feature photos of parties with other foreign legations and images of heads on pikes during the 1912 revolution. He liked timetables too, and left behind the 1912 schedule of the Trans-Siberian Express between Peking and Paris. He wrote his sister, just back from Alaska that, while “bumming around out West,” she could have stopped in China, which was “only a 1000 miles more.”

Travel for fun ended with World War I. Lothar joined the American Expeditionary Force, and received the Croix de Guerre. In 1920, he committed suicide in a Paris hotel. I wonder if the explanation lies in the love letters he saved. He received them at the same time from two Frenchwomen.

In 1923, my great-grandmother returned to Europe. This passport has a photo. She got another one in 1928, for Eastern Europe and then another in 1931 for Asia. Her 1939 passport for South America warned about travel in war zones.

How much has changed! Countries have come and gone. Ships’ passenger lists were stimulants for socializing on the voyage, not for controlling terrorists. The International Herald Tribune‘s precursor was half in French. Luggage was trunks with drawers and built-in ironing boards. It was sent ahead (and like today got lost). Hats were worn; no fanny packs, no water bottles.

Transportation was designed for comfort and delight, not torture. Trains and boats had names. Staterooms and compartments had distinct traits that were carefully noted for next time. Boat travel broadened itineraries to places no one goes anymore: Naples, Genoa, Cherbourg. Food and drink were remarkable only when bad. Grandfather complained about “Italian grub” on the boat between Alexandria to Naples.

Although they were proud that “American dental work is universally admired” and that American National Cash Registers were widely used, these travelers were not arrogant. They revered European culture, but were not awed by it. I am struck by their sense of integration with Europe. They felt themselves aligned on an unbroken continuum.

Ancient Roman battles were as vivid to them as Franco-Prussian ones. Grandfather was as curious about the new Italian warships he saw in Venice and Naples, as he was the churches and palaces. He visited Weimar and Jena, shrines to Goethe, Schiller and Hegel that represented the German intellectual bent his father had sought out decades before.

For today’s tourists, at least the ones I see, Europe is little but an assortment of monuments from a distant and severed past, monuments that lack broader relevance and are sought out mostly as handsome backdrops for sensual indulgence — food, drink and sex — or the next Woody Allen film. Europe is just another costly consumer product.

Europe was vital and relevant for my traveling relatives. But it changed, even for them.

In 1945 the Army asked my great-uncle, an authority on tuberculosis, to manage the looming public health disasters of the liberated concentration camps and post-war migrations. During his 1946 tour of Germany, his diary records the struggle to find competent health administrators without Nazi pasts. He was bewildered and shocked by what Germans, who shared his intellectual lineage, had wrought.

Also in 1945, my mother’s brother Norman, an interpreter who landed in Normandy, wrote home about the murky pasts of the Germans and French he interrogated. He complained about army companions who interrupted his sleep returning from nights of drunken carousal. Uncle Norman preferred Bach organ concerts in churches to liquor and easy women.

Mere months after VE Day, my uncles found Europe culturally and morally spent; their compatriots saw little but a backdrop for drinking and easy sex. Just like today’s tourists.

I’m guilty too though. After two decades, Europe is often little more than a backdrop for my daily life, as unexamined and unobtrusive in my life as water is for a fish.

I have never been to Weimar or Jena. Until 1989, I couldn’t visit either. Maybe it’s time I did.