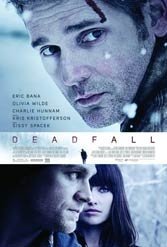 Austrian director Stefan Ruzowitzky’s snowy Badlands thriller is an uncomfortable hash of too many themes, none of which stand up to scrutiny. Alabama brother and “baby” sister Addison (Eric Bana) and Liza (Olivia Wilde) are on the botched run after robbing a casino; incest is their bond. Boxer Jay (Charlie Hunnam) is just out a prison after a jail term for throwing a fight; he still craves the love of his father. Hannah (Kate Mara), the lone woman deputy on a testosterone-laden sheriff’s team, seeks that same loving approval from her own father (Treat Williams), but he’s the kind of guy who always wanted a boy.

Ruzowitzky opens with the Thanksgiving eve derailing of Addison and Liza (they’re headed for Canada) and then applies heavy-handed coincidences to ensure Liza finds her way into Jay’s arms; homicidal Addison into the home of Jay’s parents Chet, a former sheriff; and June (Kris Kristofferson and Sissi Spacek), with Hannah and father stitched into the all-together-now chase backdrop. All this to make plebian points about family ties, broken loyalties and lethal mishaps.

Zach Dean’s script is a farce of platitudes (Liza: “I’ve never been good at anything…”; June: “Parenting isn’t easy…”) and the action itself disjointed at best. Aside from Bana’s oddball drawl, Hunnam’s abs, and Wilde’s looks, all you get are blizzards and snowmobiles.