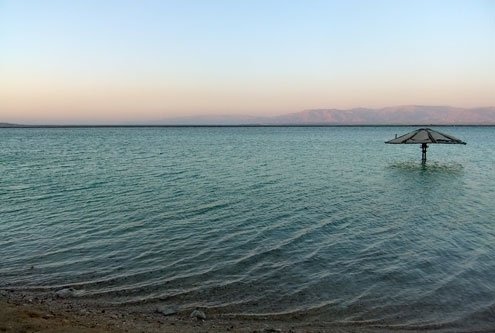 e hung around the dusty, forgotten border crossing between Aqaba and Eilat, trying to spend our last dinar before leaving Jordan. We fingered keffiyahs, exotic candy bars and Indiana Jones playing cards before settling on seven camel postcards, seven stamps, two liters of water, and a few sheets of dancing camel press-on tattoos. We posted the cards as we walked towards the border, our tattoos glittering on our biceps in the 110-degree sun.

On the other side, we walked past a line of taxis and headed to the lone road north. Birkenstocks on our feet, tent lashed to Nurit’s pack, psychedelic Beatles shirt hanging loosely over my jean shorts: what better time than this to try our hand at hitchhiking, Nurit said. She giggled with her back to the oncoming traffic as she desultorily threw out a hand, not a thumb up, as if hailing a cab in her native Brooklyn.

The idea was still a half-question, a half-joke when a new silver sedan stopped fast to raise a cloud of dust around us. We asked the old man at the wheel if he’d give us a ride. His name was Marc.

We started off, through date fields and desert, the Jordanian border running parallel to the road a half kilometer east of us, the hills stained with black from Copper Age and contemporary mining. Marc offered us dates, saying he got lots of free fruit in his line of work (we never learned just what) and his wife was tired of seeing it.

He asked us if we minded making a few stops as he pulled off the road towards the security gate of a lonely kibbutz. He parked the car at a mechanic’s shop, where young men and women with long hair and greasy hands were milling about, all with a tool or part in hand and seeming reasonably dedicated to some task.

Marc gestured for us to make ourselves at home in the shop sitting room, assembled out of old car seats. We sat drinking coffee, studying the photos and murals covering the shop walls, watching the constant flow of hippie mechanics as they tinkered on hi-tech solar panels and old farm equipment.

When we left, Marc’s trunk was full of dates. He said he had a few more stops like that to make, at another date kibbutz, at a chocolate kibbutz, a cheese kibbutz. He said compensate us for the wait with free goods, and so he did. At every kibbutz he hugged a few people, shook a few hands, and chatted for a while. He said he made $5,000 that morning.

Nurit stuck a smiley face sticker to his shirt as we finally waved goodbye to him, and he beamed at it proudly, wishing us well as he drove off. We mused about his mysterious job and his long-suffering wife as we walked the highway north again, thumbs tacking in the wind.

Next up, a semi-truck. I heard Nurit say, “To the Dead Sea,” as I propped her legs and lower-back up and she clung with her chin just above the passenger seat, trying to get within view of the driver. Then she threw herself on the single mattress behind the driver’s seat while I negotiated the four-run ladder up to the crows-nest cab of the vehicle.

Ali, our driver, drove loads of salt from the Dead Sea to the Gulf of Aqaba daily. He’d just spent three months walking across the desert, from the Sinai Peninsula to nearly Beirut. The “Walk about Love,” it was called, and there was a lot of love. And a lot of drugs, he added. He offered us apricots and Coke Zero. He said that he was Bedouin; he had two wives, “but only three children.”

Our next ride seemed to pull over as a matter of course. It was a minivan with a beautiful young Rasta behind the wheel. I sat in the back seat, jammed between two empty children’s car seats, and Baggies full of dried fruits and cereal snacks. Nurit told the driver her father was Israeli but she’d been raised in New York. He told us that his parents were American but he’d been raised on a kibbutz outside of Jerusalem. We asked if this was the only road that let onto the Dead Sea. He told us, sardonically perhaps, that there was also the road on the Jordanian side of the sea. We wanted peace in the region, but told us to be careful of Palestinians on the beaches, they weren’t used to seeing girls in bikinis.

Our final ride was in an SUV that pulled up short of us and sat for about a minute before climbing forward. The driver was a middle-aged German laborer who spoke little Hebrew and little English. He had a collection of British pop CDs on his console and Adele was playing loudly when we got in. The car was sterile and a bit frightening. I checked for child-security locks on my window but they were locked shut. I reached into my bag and found my Swiss Army knife, opened it to the smallest blade, and tucked it into my palm just in case.

But a few moments later he pulled off the highway, the automatic locks opening along with doors. As soon as we got out he pulled away. Nurit and I stood by the roadside, turned, and walked toward the beach, the setting sun painting the Dead Sea in pinks and oranges.