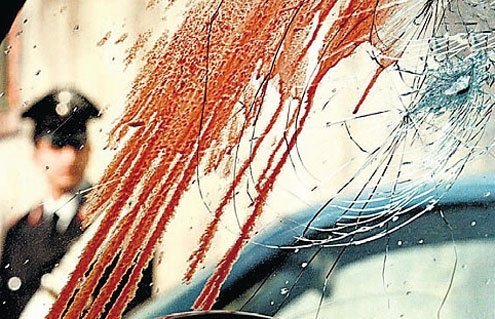 Over the years, Camorra killings have become a part of Naples' annual cycle, despite countless political promises to take on the teeming underworld.
A

fter living in Naples for two years, there are some subjects I remain as ignorant about as the moment I arrived. The Camorra is one of them.

It may be naiveté on my part, but I’ve followed the lead of my Neapolitan neighbors in feeling secure here notwithstanding the well-known influence of organized crime throughout the region. Even after the revelations contained in Roberto Saviano’s 2006 book “Gomorrah,” which exposed the sweep of underworld control of Naples, mob violence still seemed to me a burden that primarily affected people tied to the clan — either those in debt, or those in some way associated with the criminal network.

But occasionally there is collateral damage that hits disturbingly close to home. On Oct. 12, the Camorra murdered 30-year-old Pasquale Romano in Piazza Marianella in the city’s outlying residential suburb of Scampia. According to Italian investigators, Romano was shot 14 times when he was mistaken for a drug dealer who local media alleged was the intended target of the shooting. The Naples newspaper Il Mattino reported that Romano had just left his girlfriend’s apartment when he was shot inside his car.

Now Romano’s family is appealing to the Italian government to intervene to stop the Camorra from killing innocent citizens. Romano’s parents, Rita and Giuseppe Romano, wrote an open letter to Anna Maria Cancellieri, Italy’s interior minister, to ask her to take action, which Il Mattino published.

“We ask you why, in this cursed place, one continues to kill and kill again innocent people, who die because they leave their house, go to pick up their children from school, return from the grocery store or stand out on their balcony?” read a part of the letter. “What sense is there in dying like this? What sense is there in the death of a 30-year-old? What sense is there in the desperation we feel as parents whose son was ripped from our hearts, only because people say he was ‘in the wrong place at the wrong time?’ Our son, rather, was in the right place at the right time. Can’t the government guarantee people the right to live and walk the streets without watching their backs and without worrying about a shadow? Does not all of this weigh on you? Do you know there have already been more than 600 people killed by ‘mistake’ (a horrible term) by criminality? Must this cruel list still continue to grow?”

Cancellieri’s office answered the newspaper saying that the minister would find time to meet with Romano’s parents and hear their appeal in person. “It is an appeal that has made a deep impression on me,” Cancellieri said, according to the newspaper’s reports. Additionally, Naples Mayor Luigi de Magistris has asked any witnesses to come forward to help law enforcement officials find the killer.

Meanwhile, the community in Naples and the suburb of Cardito, where Romano lived, has been in mourning. A funeral was held for him at a church in Cardito.

The shooting death of Romano forces me to think back of a video that was circulating before I came to Naples, which showed someone being shot down in front of a coffee bar in 2009. That person was identified as a camorrista or a Camorra associate, not an ordinary ragazzo like Romano. But for years afterward my American friends have talked about how shocking it was that a woman who witnessed the shooting simply walked away as the event was unfolding.

At the same time, I don’t know what else she could have done. To a foreigner, the influence of organized crime isn’t obvious when you walk the Naples streets. Life goes on — parents go for evening walks with their children, mingling with other families and dogs. Teenagers pass by in groups at night, laughing. Yet fear of the Camorra is intense, with no one wanting to get between a camorrista and his prey. I probably would have walked away, too.

For me, the tragic loss of Romano is a reminder that, while violent crime is statistically rarer here than in most cities in the United States, there still are consequences to living amid an organized crime network. I may not see it when I go out on errands or do my shopping, but it’s there — and it doesn’t just affect drug lords and camorristi. Even with Italy’s stringent bans on firearms, bad things can happen.

In “Gomorrah,” which Saviano called a nonfiction novel, he describes a boss watching a TV report on recent murders and cheering dead targets as “pieces,” as in a piece of contract work. Killing someone, he wrote, “became the equivalent of manufacturing something.”

It’s a day-and-night assembly line that I pray the Italian government one day shuts down.