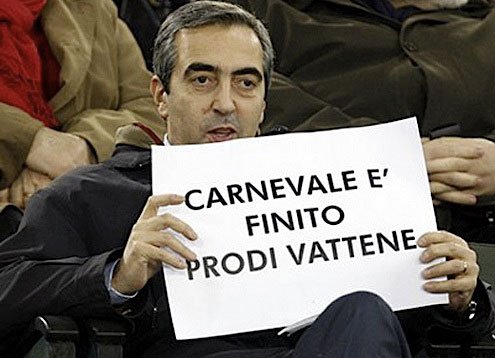 Maurizio Gasparri of Alleanza Nazonale made his views clear, while the situation in the Italian Senate has an eloquence all its own.
I

talian Prime Minister Romano Prodi has formed a new government after an upper house rebuke over foreign policy briefly cost him his job. Prodi’s center-left coalition was forced to resign in February after losing a critical foreign policy vote in the Senate that had called for the expansion of a NATO base in Vicenza and continued funding for 2,000 Italian troops in Afghanistan. The “Olive Branch” coalition (l’Ulivo), which Prodi leads, stitched together the same loose coalition that had collapsed, but its survival prospects remained uncertain. The “agony of the left” continues, remarked former Prime Minister Silvio Berlusconi. Here are some questions and answers about the crisis and the future:

Is a second Prodi outing any more realistic that the first? No. The two parties that hold up mainstream Left — Prodi’s Olive Branch (l’Ulivo) coalition led by his Democrats of the Left — still can’t govern without help from the radical fringe. That fringe won’t change 40-year-old views and, no matter what it says publicly, considers political promises as subject to spur-of-the-moment variables. Prodi can’t take much for granted, which means loss of focus and governing while also looking over your shoulders. The senate situation is impossible: 158-156 for the Olive Branch, with only about 130 “sure” votes each time. The unreformed or unreconstructed Communists have 27 votes, not two.

So why even bother? To avoid a nasty political stalemate and early elections, which would be a nightmare for all, particularly the left. Prodi has laid out 12 points he expects the whole center-left to govern by, but they’re mostly rhetorical: “We promise to be good; we promise to let Prodi speak for us; we promise to support this and that.” Such promises were delivered to get Prodi I up and running. They’re no more convincing now. On the contrary.

Why not early elections? Italy’s right could have clamored louder, but let Napolitano, a former Communist, do it his way. It was smarter, they reckoned, to wait a bit longer, assuming, probably correctly, that Prodi II won’t be any sturdier than Prodi I. If Prodi II goes down, center-left public support will crash with it, opening a wider door to the right. Napolitano essentially said, “I have no choice but to send this government [back for a confidence vote]” which itself is no vote of confidence. He called for electoral reform — basically the revision of Italy’s parliamentary system into an executive one — which the radical left opposes because it fears, with just cause, that it would suffer. The left also doesn’t like the idea of an executive presidency in the hands of someone like Berlusconi, who still runs the most powerful party in Italy. Still, they’ll have to agree on something soon because the current scenario is untenable. The latest reform came from the Berlusconi government, giving a bonus to popular vote winner in the upper and lower houses (Senate and Chamber of Deputies). The Constitutional Court changed the Senate reform to award bonuses by region, and that created the current stalemate. To call the situation is bizarre is charitable.

What risks does II face? Same as I. In the Senate, every parliamentarian allied with the coalition must vote as they’re told. Otherwise it all comes undone again. Prodi II is even less likely to want to take up such issues as the rights of unmarried couples and same-sex unions — inimical to the Catholic Church and to Democrazia è Libertà (La Margherita), the second largest Oliver Branch force, which has important Catholic ties. So this becomes rule by the neutered left. Someone will blow a fuse.

What undid Prodi the first time? The left is notoriously unstable. Differences are deeper than alikeness. All these parties have in common is that they’re anti-right, pro-union, and suspicious of corporate management. Prodi, an economist, is a non-ideological centrist — but he’s not the rudder. Outgoing center-right chief Berlusconi scoffed the left’s survival chances in a lengthy partnership because he knows its inner divisions. When the foreign policy package came up in the senate, the radical left voted against its own people. They killed the majority proposal knowing the consequences.

What were the sticking points? Old school bias. The left includes the still-radical Communist Party —these are tough, committed people— and the Greens. Neither wanted to continue supporting the Italian commitment in Afghanistan in a peacekeeping capacity or the Vicenza NATO expansion.

Why would a center-left government support Vicenza expansion and Afghanistan in the first place? Vicenza’s expansion was a pledge made by former Prime Minister Berlusconi’s conservative government to President Bush. It was an ironclad commitment made by one standing government to another. In most such cases, incoming coalitions honor previous deals even when not to their liking.

So? The extremes turned down the obvious ethical compromise: that the deal was forged by previous leadership and couldn’t be abandoned without suggesting irresponsibility and negligence. Whoever governs Italy, it’s still a U.S. ally. This embitters the rhetoric-mavens who’d rather drink hemlock than acquiesce to Washington — which is how they see it, acquiescence. The situation is like the advice conservative columnist Bill Safire’s gave to voters before the 1992 American elections. He said, “Hold your nose, but vote Clinton.” Here, the extremes feel like they’re being asked to hold their nose for months.

So the Prodi government basically voted itself down? Yes. Foreign Minister Massimo D’Alema, also a former prime minister, literally begged the fringes not to yield to self-interest, but that they did. The government lost by two votes.

So the extremes wins? The collapse was a pyrrhic victory. The left makes news by committing suicide.

How much of this is Prodi’s “fault”? On paper, no fault In reality, he couldn’t hold up an election promise that the center-left would be one unit. At least now, in Prodi II, the perils are clear. In fairness, Prodi’s never was an alley fighter. He’s an economist who really wants the country to enter the 21st-century, which it resists fiercely. But he’s more stubborn than tough. The left doesn’t like tough guys because its parties are mercurial. Their leaders are self-styled intellectuals and great talkers. Rifondazione Comunista), for example, is happily stuck in the big-demonstration 1970s era, in all its romantically anachronistic glory. They’re similar to the pre-Blair, no-nukes British Labour Party of the early 1980s. Overall, the left is a shambling association of parties and politicians that rarely has much in common unless it’s out to slay a monolithic adversary — and Berlusconi was perfect in that role last year.

What about public confidence? The void between rulers and governed is uniquely vast in Italy. Politicians are remote. They live in a spoiled world. Public trust is abstract. No politician in Prodi’s center-left coalition enjoys much public love. And only one national politician provokes visceral reaction, love or hate — Berlusconi. He’s the only action-man (bogey man to others). Truthfully, the center-left’s recent success is the sum of negative energy directed at the status quo ante. It’s a bit like having no quarrel with the American Republican Party, but wanting Bush out at all costs. Not a healthy climate.

How much anti-Americanism in involved in what’s happening? The Vicenza base expansion was nasty because it involved making the extremes look like they favored militarism and U.S. policy. This government wouldn’t OK Vicenza if they United States asked now. But it didn’t ask now. For the old Leftists and their newer acolytes seeming to support “American adventurism” is too much to bear — because they hate George W. Bush, though not necessarily the United States.

What happens now? Napolitano said he saw “no alternative” but to give Prodi a second chance. If this happens again — if the government loses another vote, even a minor one — the right will go ballistic. It also means they’ll be working hard at senate subterfuge. Next time around, it’s early elections.

Automatically? No. Napolitano is entitled to pick names from a hat until he believes there’s no chance at consensus. In the past, Italian presidents have tapped a succession of candidates before anything worked. Once upon a time, governments were identified by name and number, as in Fanfani III or Andreotti V, to keep track. Berlusconi survived five years, the full term (2001-2006), because he managed to keep his rightist alliance (Forza Italia, Alleanza Nazionale, Lega Nord) in check. Why? The right in general tends to exercise greater discipline and Berlusconi is has Svengali powers: you don’t want to vex him. But before Berlusconi’s “calm” stretch (in terms of longevity), Italy was pockmarked with broken governments. So there’s no guarantee of a quick fix.

Why can’t Prodi ask his minority parties to suck it up? Because sucking it up doesn’t exist in Italy. Opportunism reigns. Maturity is a non-factor. After the Senate vote, the sides traded insults at about the level of the soccer extremists who were vilified for police assault and murder. Italy’s government officials still have a difficult time representing social or political civility. They’re better at food fights. But the world sees them.

What’s Berlusconi’s move? He keeps jabbing away at the legitimacy of Prodi II, reminding people he never had to resign. He hopes the second, weaker Prodi team trips trip itself. And if it they do, he demands elections — Napolitano will be in a tough spot to say no.

What about the international impact? It makes Italy look ridiculous or sublime depending on your perspective. Critics of Berlusconi, a billionaire with a big ego, reveled in calling him, and Italy, ridiculous. The collapse and the remaking don’t help the country’s image. Add to that the near fistfights that followed the vote and soccer hooligans to take solace that they have some of their own in Rome.

And the left? Same old, same old. This coalition pledged to avoid intractable situations. It said ideological and policy differences wouldn’t come in the way— this after five years of hurling dirt at Berlusconi. The misfire speaks to Italian parties placing individual agendas ahead of unity or civics, concepts that may be terminally inoperative here.

What about electoral reform, so that this doesn’t just keep happening? The right would welcome sweeping executive reform — but only on its watch. The ironies are abundant. The right is static and compact. The left wants reform in principle, but not to the exclusive of smaller parties. Moreover, it’s never in power long enough to see anything through.