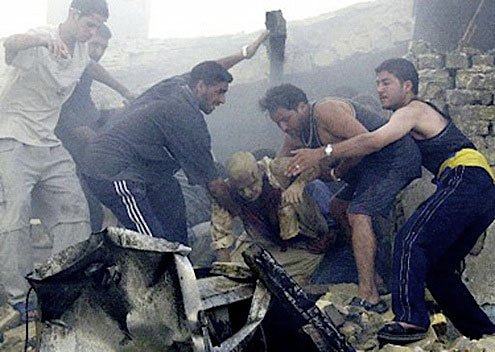 A Roosevelt, Teddy, might fit these times. Its advocates charge ahead, oblivious.
V

isiting has its privileges. What, my friends ask, do I think of the Iraq war? Never hostile, the question is a conversation-maker or a pre-burger prod; I am, after all, among old friends, mostly male. They’re more frustrated than angry.

I’m also in Washington, D.C., the heartland of politics — except in August. The proud holder of three electoral votes, the city has unflinchingly and sometimes haplessly endorsed Democrat after Democrat.

Washington’s two daily newspapers, The Washington Times and the Washington Post, are both pro-war, though the latter mostly regrets and frets.

That The Times, lovechild of a Korean Christian evangelist, would slam hard on the patriotic drum is anything but a surprise. It’s a longtime antidote to all things liberal, perpetually ready to exhume Ronald Reagan and dust him off for another run. Obligatory conservatism has all the charm of a roadblock, and is just as thick. God Bless Me, The Times lullabies to itself.

The Post’s situation is very different. Custodian of liberal wit and a one-time establishment basher (“one-time” means scrolling back to Watergate and Richard Nixon), its now seeks to do right by war skepticism, terrorist fears, and America’s latter day role as the free world’s official wrong-redresser. The hodgepodge result is a kind of unconvinced and unconvincing moderation its editors suspect Democrats will probably need to adopt if they are to unseat Bush’s successor 2006. Translation: Say nothing you’ll regret (except when clearly marked “opinion”); be moderate; never apologize, ignore error, back the troops.

To tell people that failing to support troops is not treason but dissension goes only so far in a city that these days places a premium on military-style obedience. Or on not talking loudly. To insist that skepticism is duty-bound to undermine patriotism and doubt militarism is not to speak in Greek but in Arabic. What about the terrorists? They hate us.

And around and around we go, with humor, wit and realpolitik in dreadfully short supply.

A Roosevelt, Teddy, might fit these times. Its advocates charge ahead, oblivious.

So what do I think?

The long-version, the one between me and my (smallish) God, I’ll keep to myself. But here’s the short one:

— The war in Iraq is a self-indulgent and oversimplified enterprise undertaken by a committed group of American nationalists as a direct outcome of the terrorist attacks on September 11. The needling, self-important Saddam Hussein, long a thorn in Washington’s side, was a “straw man” target of opportunity. Invading Iraq could be justified in ethical, military and political terms if partially-accurate information was disseminated and promoted, and national ignorance (assisted by wrath) prevailed. The war is an entirely civilian formulation of missionary patriotism.

— The war cannot be won, will not be won, because so-called insurgency is a militant mix of regional nationalism and pan-regional resistance that is dynamic, Viet Cong-style, and judges missionary adversaries as the ugliest foe of all. This is because they tell all around them that they’re using force for a greater good, an enraging colonial prescription that can induce irrationality even among sane opponents.

— The democratic values to which the United States adheres and wishes sincerely to instill elsewhere are no more easily transplanted than a heart. And a physical transplant, though desired by doctor and recipient, always faces the prospect of physiological rejection. The incompatibility evolves from amoral conflict between the sources. For that reason, effective democracy, however chaotic — India’s, say — arises from internal desires manifest through indigenous visionaries.

— Cultural variables, given short shrift by prosperously impatient societies, stand to further complicate foreign affairs. The leaders of the world’s lone superpower are talking almost exclusively to friends. This means they hear mostly what they wish to, or what’s available, scolding all else as outlaw. Yet the resentments that produce the strategy of terrorism is present if concealed in many legitimate societies and citizenries.

— Little has been done to imagine the layered inferiority complex that helps generate literally suicidal disdain for the United States. The goal instead is to eliminate the haters. But terrorism is a greedy subtraction that gathers energy from the institutions created to destroy it. Give terrorist coercion outsized quantities of attention and rebels of all stripes will further identify themselves as its willing agents. The perversity of the paradox advises against media hysteria, to little avail.

— Comprehensive Middle and Near East peace based on steady secularism is illusory because millennium-old religious and tribal differences, exacerbated by the fundamental argument over the existence of Israel, betray the foundation on which a common order is built and pursued. Terrorism is that feud’s raging spillover; it is a also central condition of have-not envy. Again, if relative peace and democratic order is to come it must emerge wholly from the states and populations currently at odds. An education in the enduring value of egalitarian civility does not necessarily mitigate the conflicts or, even in the case of success, guard against relapse. No one state can direct history or mandate a uniform definition of progress.

— Iraq may engrave a constitution and ultimately elect a legislature, but it will do so only because these institutions are externally guaranteed. Since any such pledge is temporary, the country will face civil strife, the assassination of chosen leaders and ultimately — perhaps within a decade — again find itself under authoritarian secular rule. This time, however, the secular leader will probably be more to America’s liking.

OK, OK. I know. But you asked. Now fire up the grill. I’ll be out of here shortly.