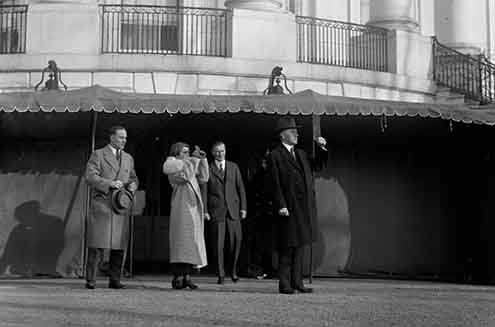 Things weren't always so laid back. In1925, President Calvin Coolidge and his wife took the back yard for a solar eclipse.
T

he great American eclipse was hyped as a life-changing experience. Its passage across North America from Oregon to the Carolinas led mass pilgrimages. People wanted to be in the right place for the celestial transformation. I decided to stay put in Brooklyn to measure the local effect. What would people do? How would they respond? I decided on an informal survey.

The first chat I had was with a friend who works at the Museum of Natural History. I thought surely he he’d have big plans.

“Oh gosh, good question,” he said when I mentioned the eclipse. He sounded dumbfounded. “I was just thinking about how lame I’ve been. I haven’t made any plans. Certainly a total eclipse is a pretty big deal, but then again, I actually can’t decide if it’s a big deal or not. The sun gets eclipsed by clouds all the time.”

This was not what I expected. I agreed he was lame.

I next turned to my visiting Generation Z cousin, a university student who seemed to have his pulse on all things cool and happening. “Great American eclipse? What are you talking about? I’ll be back at school by then. Whatever.”

How could people be so aloof? I mean, this would be life-changing!

On the morning of the eclipse I met a neighbor. I assumed he’d also decided to stay home to have his life changed in Brooklyn. Unlike many parts of the city, buildings here don’t tower and the sky feels more open.

But wait: what about the eclipse? “Oh I’m just back from Martha’s Vineyard. I already saw it on the news from somewhere in Oregon.”

I told him that didn’t count. I reminded him this was an actual event available to all in the non-TV, non-internet sky. “It doesn’t pass over us until 2:30 p.m.,” I reminded him. He was unmoved and went back to his day.

At this point I was feeling a bit despondent about my fellow New Yorkers. Was no inspiration in the works for any of them? Inside, though, I was sure the actual eclipse — the aura of afternoon darkness — would bring them around.

At 2:20 p.m., I took my homemade viewer box to the roof of my apartment building. Facing away from the sun, my pinpricked hole reflected an image of a white dot on the paper at the other end of my shoe box. I saw the sun clearly and waited excitedly. Finally it was going to happen.

But where was my friend who’d totally planned to meet me?

“It’s going to happen any minute!” I texted him.

Egad! I thought. No one really does care.

I was relieved when another neighbor arrived on the roof. Surely she was a fellow eclipse soul.

“Anything happening?” she asked. “I don’t have glasses and I’m not even sure what I’m supposed to be see, but I thought I’d come outside. It’s supposed to get dark or something, right?”

I sighed. I showed her the image in my viewer as my friend arrived plodding up the steps.

“Don’t bother with that box,” he announced looking disheveled. “I just got a video from my friend in South Carolina. You can see it great on my phone.”

It was no use. I gave up. I took my shoebox viewer in hand and focused on the white dot. I began to see the shape of the moon edging in on the sun.

“Look, you guys. Here it is. Happening live right now!”

I passed around the box and finally heard “ooh’s” and “ah’s,” the sound of people being moved. Finally.

For somewhere around 20 minutes, the moon created a crescent-shaped sun, a 70 percent eclipse.

As we waited for the moon to completely pass, my neighbor announced she was “satisfied” and walked down from the roof. My friend admitted he too had enough. “I’m getting hungry. Let’s get something to eat.”

I shrugged too, gathered up my shoebox, and we headed out for a kabob.

And so, the great American eclipse ended illuminating less of the celestial wonders and more of the human condition. Promised a transformative moment, my fellow Americans were, depending on their mood, lame, disengaged, checked-out, satisfied or hungry.

The life-changing eclipse was just another day on the planet. Next.