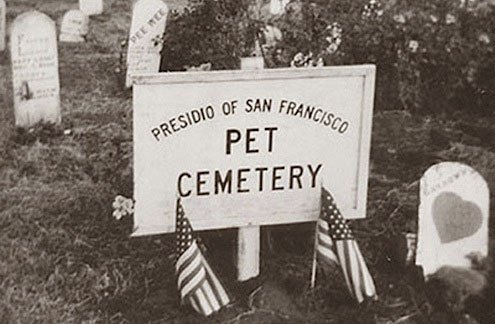 “Would you actually spend that kind of money to bury Bella?” asks nonna.
T

he nerve of Maria Angela,” says nonna in our monthly New York-Rome conversation. “She’s upped the price for her dog sitting by $15. If she’s going to come into Manhattan, she says has to charge for her Metro North and Subway tickets… Imagine that. I think she’s doing this because she spent another $15,000 on pet cemeteries. Santino’s going to roll over. Again.”

Maria Angela: A 50-odd-year-old family friend in the suburbs who pet-sits for fun;

Santino: Her father, deceased since 1997, leaving her an “indiscreet inheritance”;

Nonna: My Roman grandmother who would rather be in Rome when she is in Manhattan and vice versa.

I’m self-employed, so I understand Maria Angela’s transportation costs. So I respond, “Yeah, Maria Angela’s being a bit tirchia. Santino’s going to flip.”

In my past life (1980s and 90s) as a dutiful middle child, I, along with my family, loved and lost a squirrel, three fish, four rabbits, five dogs and a bunch of tadpoles. All were given individual, understated burials in our backyard — except for the tadpoles who cost us $150 in plumber fees.

The idea of investing in a funeral service or burial lot would have been absurd. Until I worked in Los Angeles.

For a few years, I was Top Assistant (slightly bitchy) to a Hollywood actor, call him BP, and his Doberman Pinscher, Cody. Cody had been BP’s faithful companion through the rise, fall and sequels of BP’s career which included a canceled TV series, a canceled action hero film series and two canceled marriages. Cody had been featured in a magazine layout photographed by Karl Lagerfeld. Cody was important. One March, he passed away in his sleep while BP was in Bangkok filming a watch commercial.

“Cody? How is he? Did the chiropractor come by? The wanker charges me a buck fifty to massage my bloody dog.”

The white noise was painful, and I immediately began to fill it. “I’m sorry, BP. I really am. He was a good dog. He really was.”

BP barked into the phone, “Irish. Get Irish.”

I simultaneously scrolled Filemaker, Outlook, a palm device and two cell phones in search of the name, “BP, I can’t find Irish.”

“Irish sod. Is this someone we, um, don’t like?” I began looking under “Assholes,” the category aptly named for those out of our favor.

“Finger out. Turn the pages of your dictionary, Erica. Sod. Dirt. Soil. Cody should be buried on Irish ground.” His tone was determined.

“As Baccarat. Irish soil.” He hung up and I slipped into Top Notch Assistant (more bitchy, more creative) with a call to Aer Lingus about the costs to fly a 140-pound dead American dog to County Cork. The customer service representative laughed in my ear, said something about quarantine and spoilt actors, and then hung up.

I called the cemetery where BP had filmed a period piece (everything shot in Ireland is a period piece) about a father-and-son relationship forged while working together as grave diggers and football hooligans.

Mr. Maley wasn’t sure if I could send a bag of ashes via Federal Express. He also wasn’t sure Cody could be buried in a Catholic cemetery since he wasn’t baptized. I scrolled the internet for pet cemeteries in Ireland when I came across officialirishdirt.com, a site that sells Irish soil.

Yes, I bought dirt — two bags to be shipped overnight ($200) for a timely arrival to coordinate with BP’s return (two days hence), Cody’s cremation (environmentally sound teak box, $250; cremation $100) and service led by Malibu’s finest former Catholic priest, Mr. Don ($400). I bought a pet blessing at www.blessourpets.com ($50). BP was thrilled and called in his favorite photographer to document the event ($4,000).

Overheard: “Dammit, this is better than anything Jane Seymour could do with her menagerie.”

All this swims through my head when nonna repeats, “Would you actually spend that kind of money to bury Bella?”

To bury her? Most likely not. To clone her? Definitely.