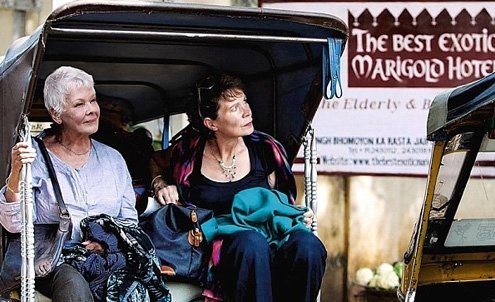 Expat life is a little different than a movie passage to India.
I

s it politically incorrect to say I miss the days of the elegant expat? The Julia Childs and Lord Byrons who would arrive in another country with such pomp and ceremony. The locals would regard them with skepticism, but they’d be too busy being flamboyant to care.

I blame the movie “The Second Best Exotic Marigold Hotel” for getting me onto this train of thought. I watched it on the plane flying back to Italy from Australia. The plot was the forgettable, but the showy British expats were not.

Before you voice your distress, I studied enough history to know the British can’t be glorified for what they did in their colonies. Hell, I come from one of their colonies. We can’t tell you anything about Aboriginal culture, but we can name all the royals and their many, many, many lovers without missing a beat.

Still, I watched Dame Judy Dench being chauffeured around on a tuk-tuk and sighed with envy. If only the expat experience was like that today. If only we had gentlemen’s clubs to retire to in the afternoon, exotic cocktail in hand, armed with an arsenal of complaints about the ghastly local weather.

Now then, maybe there are places where the expats still live like this. Maybe it’s something city expats experience all the time. Maybe I should stop wishing I were a senior citizen living in a Third World country where my pension lasts longer. That’s not the point.

Expat life in rural Tuscany has all the opulence and pageantry of a wet dog. You think twice before you touch it. And yet, I spent the last three weeks listening to people gush.

Oh it’s not great. But I stopped bursting bubbles long ago. People want to imagine you perched on the Tuscan hills, jeans rolled up to your knees while you squish grapes between your toes to make wine. You’re rosy cheeked from all the fresh air and there’s plenty of homemade pasta and tomatoes to go around.

For starters, it doesn’t matter how great the view, you’ll become desensitized to it eventually. Everyone does. And besides, I’m pretty sure no one crushes grapes with their feet anymore. It’s not hygienic.

There aren’t enough columns in the world for me to adequately cover why expat life is far from glamorous. No one dreams of getting into an argument with the postman because he refuses to understand that you want to post a package without registered post. You don’t aspire to be 27 and too scared to answer the phone because you’re worried the person on the other side will say something you don’t understand. There’s nothing admirable about returning to the country of your birth only to realize you don’t belong there any more than you do in your adopted country. Citizen of the world is nothing more than a buzzword to make you feel better about being an outsider in every setting.

Perhaps my experience is different because I’m not an expat by choice. But I wonder if there are any expats left who aren’t bound to their adopted countries by love, obligation or the realization that they have spent so many years abroad they can no longer survive professionally or socially in their birth countries.

I’m the only Australian in my Italian village — literally. It’s lonely. I want to be able to share my cravings for Cadbury chocolate and bag Sydney and not have to tell another bloody person that we do not have kangaroos in our backyard. And while I’m on subject: Yes, Australia has coffee, yes, we have gelato and no, our lives are nothing like what you saw on the television series, “McLeod’s Daughters.”

Maybe we pine for the days of the great British expat not because we want to eat kedgeree and shoot game but because it represented a time when foreigners were part of a community.

You weren’t left to fend for yourself, but had a network of people who understood your culture and understood just how harsh the native sun could be to your delicate British skin.

It’s all well and good to proclaim that foreigners who choose to live in another country should assimilate, but it’s mighty tiring always being the odd one out.