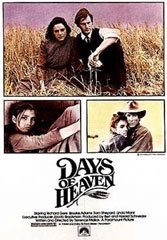 Texas-born Malick rejects the half-hearted. At his best (“The Thin Red Line”), his paradoxical amalgam of sweep and intimacy produces cinematic grace. At his messiest — and “Days” is messy — his romance can’t bear its own weight, ending direction per se and urging sequences to speak for themselves, which they sometimes can’t.

It’s 1916. Laborer Bill (Warren Beatty) kills a Chicago steel mill boss and flees to the Texas Panhandle with his girlfriend Abby (Brooke Adams) and her younger sister Linda (Linda Manz). Pretending to be a family, they become seasonal laborers under the benevolent management of a farmer (Sam Shepherd) who is unaware of the Bill-Abby love affair. But the farmer falls for Abby, Bill sees an opportunity, and potentially tragic dominoes assume their positions.

In many respects the production belongs not to Malick but to the aging Spanish cinematographer Néstor Alemandros, whose visionary prairie footage anchored an otherwise choppy narrative (Texas is actually Alberta). Alemandros, going blind at the time, was determined to create hues that fit pre-neonic times. In tandem with Haskell Wexler, who succeeded him when the budget-busting film dragged on, the two masters make a thing of beauty. Lush doesn’t describe its Tolstoyesque grain. The story is in fact little more than a sibling of the prairie. Voice-overs by Linda help fill in the pieces, but Malick never supplies credible human glue. “Flawed masterpiece,” a commonplace phrase in both filmmaking and literature, is made specific by this pretty adventure.

The movie’s toll was high in many respects. It was a commercial flop and the chastened Malick didn’t make another film for two decades.