Day in the life 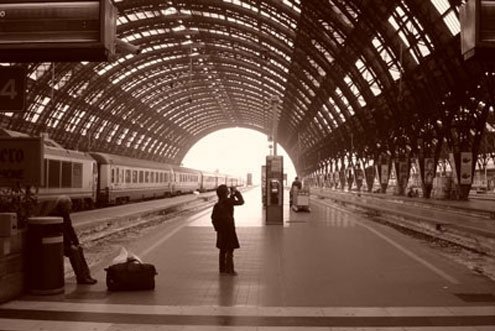 henever I tell people I live in Milan, they always ask “Don’t you just love it?” Obviously they have slotted me into one of the stock — happy — pictures of living in Italy. When I hesitate — as I always do — they quickly slot me into another stock picture of Italy, the malcontent abroad.

It’s complicated. The reality is somewhere between the dream of sunny Tuscany and the nightmare of bureaucracy and bad telecommunications. A day in my life may explain it better:

Breakfast of buttered toast. Bread from bakery around the corner and butter from Alto Adige — both excellent.

Workmen call to say that cabinet promised for this morning will be here tomorrow (it arrives two days later). Disappointing, but to compensate they can get me the table designed by a well-known modernist I want at a good price. The dealer is a friend of theirs, they tell me. He owes them.

An air hammer is going full bore in my building’s courtyard. I can’t work, so think up an errand to get me out.

I’m tired of my 1980s brass lamps and I’m tired of Ikea. Maybe the firm that re-plated my great-grandmother’s knives can re-plate the lamps in chrome. I call to ask if they can. Probably, but they have to see them.

This I do love about Italy: there are people who repair things.

I get on my bicycle. I rode bikes before it was cool; Rockford, New York, Paris. Milan is best. Flat and small, it’s made for bikes, if you don’t mind milanesi in cars.

I cut through the Public Garden. Urine smell. Under every bench lie the detritus of rough living; beer bottles, tuna cans and plastic prosciutto trays. Twenty years ago, it would have been used syringes. Things have improved.

The bike wheels crunch over horse chestnuts. I linger over childhood memories of collecting, sorting and polishing them until their mahogany luster sadly faded.

Out of the park, I take Via Manzoni. The Armani store is on my right; so is La Scala; the Duomo is ahead. Geraniums, an equestrian statue. Just like the postcard.

Diesel smell. Diesel in the morning means Europe, adventure and away from home.

This is the shortest route to the metal shop, cutting across Milan’s concentric circles. However, it is the cyclist’s route from hell; paving stones and tram tracks on every street along the way. Luckily it is a dry, sunny October day.

While bumping along Via Manzoni’s stones, bicycle basket and cargo lurch wildly, almost throwing me. The nut holding my bicycle basket has worked loose. I paid a premium when I bought the bike from the guy downstairs instead of a cheap place in the hinterland. Bike guy had congratulated me on not settling on a cheapo from China — a mere two weeks ago. He didn’t factor in paving stones. Nut is gone, but a hair elastic kind of holds it together.

As I search for the nut, a cab driver yells at me. My little bike and I are “blocking the (expletive deleted) taxi stand…”

Overhead a helicopter circles. Another cyclist says there’s a student protest, but you’d think it was rebellion in Bosnia. Farther along, in front of a bookstore, a clutch of red flags sprouts from a small angry crowd yelling slogans; whistles, and a megaphone. It’s an Italian labor dispute, 1970s style. With helicopter overhead, it’s Milosevic meets Marx.

Soon I ride under the Napoleonic arch in Piazza XXIV Maggio — another postcard. To my right is one of Milan’s canals or Naviglio. I don’t have much time to admire it because an SUV almost forces me into it.

My arms shake with fatigue from steering the wobbly bike on the uneven pavement and keeping my wheels out of the tram tracks.

“Ding, ding!” It’s the gentle bell of the tram from behind telling the lady on the bike to get a move on.

Soon it’s blacktop and an easier ride. A truck with construction workers guns by me. Do I need reminding that they are more macho than a lady on a bike?

A car jockeys for a place with me at a stoplight; rude gestures.

Everyone seems afraid something will be taken from them-even a few meters of pavement.

I go under an overpass defaced with angry graffiti. More urine smells. Trash lolls in the corners. It is narrow and the cars stuck behind me honk.

On the other side, the cars roar by. The sound of cups clinking in a bar brings calm. Coffee wafts out.

I’m finally there. The re-plating place is an old Milan building built around courtyards extending behind. Residences in front, workshops farther back. I pass through two courtyards and round a corner. I see trees in front. The metal shop is in a low building with a tile roof. Its garden has gnomes and Snow White. Rosebushes bloom. Birds sing. Men in blue smocks and caps made from newspaper josh in Milan’s dialect. They carry a rough wooden tray laden with freshly-plated bits of metal.

They even wire my broken bike basket back on.

On the way home, I take the long way. I discover new streets and new Milan life. A storefront church, an Egyptian pizzeria, a funky new design shop, a store where they remake old clothes, an interesting-looking restaurant. The helicopter has gone away… I guess they subdued the rebellion.

It is a gorgeous October day. I can see snow on the Alps far away.

No, I don’t love Milan. But I can be mighty fond of it on occasion.