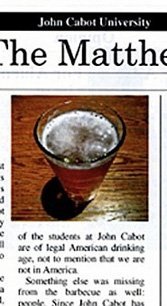 ou want dated? No, not a date. Dated. As in out of date. Here is dated.

In the fall of 1971 teenaged agents of the Columbia Anti-Imperialist League, irked by too much fun involving girls and beer, “raided” the university’s lone campus frat house on 110th Street.

The incident received brief mention in the Columbia Daily Spectator under the ominous headline “Frat Party Routed” and sent beer-lovers running for cover for the remainder of my college days.

A moody student named Ethan, who headed the Anti-Imperialists, said he saw no reason why ideologically-correct Columbia should tolerate frivolous alcohol, the Washington Establishment’s “drug” of choice, when so many alternatives were both illegal and therefore cool.

Tails between their legs, the frat boys sulked, victims of an strange take on reverse prohibition. Later, I’d see them furtively hauling kegs to their dorm rooms by night.

Though I didn’t drink, I felt for them. They seemed like so many deer in counterculture headlights. That was then.

“We were ready for the first party of the semester, always so well attended and always fun. It was my second and final year at John Cabot University, and I was ready for a good one. So imagine my surprise when at the Fall 2005 barbecue, there were no beers to be found!”

The highlights of Ilona Viczian’s intoning are an exclamation point after “no beers to be found!” and a later reference to students no longer being “under the wing of Mommy and Daddy.”

To which I say: Ilona, count your blessings.

In 1971 Ethan’s Raiders would have swept in from the North demanding (in no particular order and quoting Marx) that you ditch conspicuous consumption, get with anti-war demonstrations, denounce the oppression of women and black men, and support the legalization of marijuana. Oh, and by the way, the curriculum should include worker’s rights.

It’s different now. Instant communication dispenses with complete sentences. Alcohol, a lot of it, plows hard into reckless pheromones, the ones that temporarily neutralize shame.

Viczian, a good reporter, interviewed Chris Curry, the school’s dean of students. “The school,” she wrote, “should not and does not want the reputation of being a stepping stone before a big night of drinking or going out — in other words, having a few at John Cabot and then moving on to another local pub and continue to party. ‘Drinking is just not a primary focus at John Cabot events,’ Curry said.”

No argument from me, except maybe that the debate is numbingly vain.

Here’s what Spectator, the equivalent of The Matthew, printed 35 years ago, by students the same age: “Student apathy is discussed conspicuously on this campus and on others. But the dilemma isn’t apathy. National decisions affecting students throughout the land are not made based on listening to those students, who have made their views known time and again. They have said: End the war in Vietnam, respect the pride of the Black Race, give women an opportunity to advance in the work place. Curriculum should reflect not only the core values of an informed citizenry and civilization but the developing views, however provocative or even radical, of its next generation of leaders.”

Were Spectator’s writers intrinsically better than their counterparts today? Nonsense. But staking out ground and holding it was tougher and more defining.

Ethan’s Anti-Imperialists were often absurd. Did they want fun? Of course. Preaching no beer, no makeup, no bra, no nukes, no war, and so on, was it’s own belonging. Conformity merely had a different prefix: anti-. But anti’s advantage was the effort it required.

Disparaged, the Anti-Imperialists had to prove themselves: so they read, and read more — literature, history, politics, you name it. They wrote poems and essay (some of them awful) and went to concerts. They argued over Jimmy Page’s chord mastery (Led Zeppelin was rarely in tune). The pleasing indolence of chat rooms and iPods didn’t exist.

High or low, culture was aloud and isolation nearly impossible. You didn’t have to be either certain or right. You were required to explain yourself. Sound bites didn’t cut it and news implied some severity of purpose.

Not always fun, granted, but challenging.

Elsewhere in the John Cabot newspaper, a wholly praiseworthy undertaking, is a pseudo-editorial titled “A Cause For Alarm,” labeled as “A Rant By Tyler Lee.”

Tyler Lee is indeed cross. “We have lost ourselves at that club in that colorful 12-euro drink,” writes Lee, who also laments lost individualism. “The saddest part of the curse is that we hold ourselves, in a small corner of our spirits, the cure — and yet we leave it corked still!”

I’m sorry, Tyler, but I don’t quite follow. Or I do but want more. At this point I’d even take back Ethan, who was later a senior vice president for corporate communications, counterculture irony at its best. I’d take him back because I respect him for having ideas, expressing them, and working the fringes of a tough campus.

Four years ago in Prague, where I edited a weekly newspaper, I had a bright young reporter and debater who had won a series of university prizes. One evening, he offered to get food for those of us stuck inside on deadline. The managing editor ordered Mexican.

The young man took the order, began walking down the hall, then turned.

“Hey,” he asked us sincerely, “do you want me to prioritize the burrito?”

Clause for alarm? Who knows.