Date with a giant 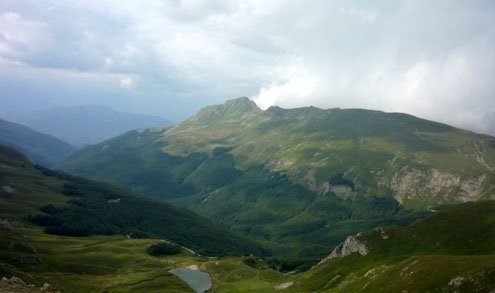 very mid-August, rain or shine, I have a date with a giant. Though my giant, Monte Cusna, isn’t as tall as either Monte Bianco or even nearby Monte Cimone, it’s still among the loftiest peaks in the Apennine chain, which runs the length of the Italian peninsula. The 2,121-meter-high mountain is located in the Parco Nazionale dell’Appennino Tosco-Emiliano and straddles the border between Emilia-Romagna and Tuscany.

Legend has it that the long crest of the mountain — which looks human in shape — is really a sleeping giant, perhaps a stubborn and vigilant shepherd who refused to leave his natural “flock” unattended, in this case the fir forests of the Dolo Valley and the beech and chestnut woods of the Ozola Valley that sprawl below. Monte Cusna’s streams are considered tears running from the giant’s eyes.

From the summit on a clear day, you can see Tuscany’s Apuane Mountain peaks as well as the Ligurian Alps — all the way to the Gulf of La Spezia, the Mediterranean Sea, and even the island of Corsica. Usually, I don’t climb that high. Instead, I stop to pick bilberries. My final destination is Rifugio Battisti (1,761 meters), a Club Alpino Italiano (CAI) mountain lodge known for outstanding cuisine.

My trek starts from the huge parking lot at Case di Civago (1,048 meters), near the village of Civago, a frazione, or hamlet, of Villa Minozzo in the province of Reggio Emilia. On average, the long, steady, 713-meter climb takes about two-and-a-half hours, but that time can vary depending on the size of your group and how often you pause to pluck berries.

We take mule trail n. 605, which shadows the Dolo stream that the path crosses twice. The shady woods soon reveal secretive, porcini mushroom hunters. It’s their season. After 20 minutes, we pass watering troughs in a glade, with butterflies dancing in shafts of sunlight. My husband wades through stinging nettles growing on the sides of the path to pick a handful of raspberries he then hands me. We keep left at a fork leading to a wooden bridge.

As the trail ascends, the tree species change suddenly. We are in the Tenuta di Abetina Reale, a fir forest that was first documented in the 14th century and later replanted during the D’Este family reign in the 1600s. It was reforested again in the 1800s, 1920s and 1940s, after wars depleted local timber. The path reaches a dirt road that leads to the Rifugio Segheria (1,410 meters), a privately run, 44-bed lodge with a restaurant and convenient toilets. Segheria means sawmill, which the building housed from its 19th century construction into the 1970s.

After watching riders groom horses, we return to the mule trail. Soon, the woods open into some of the Apennines’ largest bilberries meadows. In size and appearance, bilberries resemble small blueberries. They’ve been used in jams and pies for centuries. We stop to pick and eat, our fingers and tongues gradually turning a dark blue. Above us is the Sprone del Monte Prado (1,955 meters) and, of course, my giant Cusna.

We reach the forest access road where four trails converge on Lama Lite, a kind of saddle between Monte Prado and Monte Cusna. Rival Garfagnani and Reggiani shepherds fought bitterly for the rights to these grazing pastures, accounting for the name lite, which means fight or brawl in Italian. Nowadays the trail attracts droves of hikers, mountain bikers and horseback riders. Here, the forest access road, which is part of trail n. 1, meets trail n. 00, the Grande Escursione Appenninica (GEA), a 400-kilometer Apennine route that crisscrosses through Emilia-Romagna and Tuscany. The GEA is also part of the Sentiero Italia (SI) and European Trail E1.

We turn right, following signs to the Rifugio Battisti. In August, the rifugio buzzes. Dining reservations are a must, but simple refreshments and wonderful crostate are available for all. We usually picnic and cool off at a nearby lake, a glacier-made cirque on a moraine. Though Apennine glaciers are long-gone, their traces abound.

Inside Rifugio Battisti, a wood fire welcomes us. The lodge is named for Cesare Battisti, a renowned World War I Italian nationalist whose picture decorates a wall. Born in Trentino-Alto Adige (then Austrian territory), Battisti was hanged as a traitor by the Austrians for fighting on the “wrong” side. The 38-bed lodge was built in the 1920s and rebuilt after World War II.

The cooking at Rifugio Battisti is rightly renowned. I remember a couple showing off a dinner-plate size porcini mushroom they had picked. The lodge also gave me my first taste of piquant, nutty-flavored zuppa di farro alla Toscana, thick and delicious Tuscan-style spelt soup, for which the kitchen is rightly famous.

Today, I find the lodge nearly empty. I order farro with cheese and legumes, whose flavors blend effortlessly. Others in the group order creamy polenta with sauces of beans and meats. Choruses of approval resound as we try each other’s meals.

The best comes last: bilberry and hazel tarts, not sugary but rich and full of fruit. We also try savory-sweet green tomato jam crostata. Roberto, the manager, offers us a taste of early-vintage wine from his azienda agricola near Canossa. The hospitality and the lingering taste of the meal sustain us as we hike back to the car in the downpour under the giant’s watchful gaze.