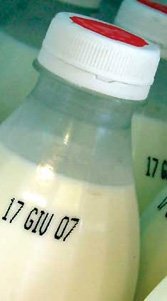 Obediance is fundamental... maybe.
A

fter four and a half years of living together, my girlfriend and I had our worst argument yet. We’re not arguers, so this was serious. I was spooning mayonnaise into a bowl of tuna fish when she grabbed the jar out of my hand. “Look,” she said, “this mayonnaise is expired. It expired last week.”

Without even smelling it she screwed up her face: “Che schifo!”

“Mayonnaise doesn’t expire,” I countered. “At least not on the date printed on the jar.”

“Then why do they bother dating it?” she said.

“So that you’ll throw it out and buy another jar in two months. It’s Marketing 101!” Our little tiff devolved into a free-for-all, each of us throwing our full weight behind our words like a couple of Neanderthal newlyweds at Lascaux.

“You throw perfectly good food away for no good reason.” “You want me to eat spoiled eggs. Are you trying to poison me?” And so on, ad absurdum.

The problem, as I have come to see it, is one of mothers. My mother is of the Jewish-American variety, so growing up I heard things like, “Don’t throw that away, it only expired last month.” She is a woman who shops in mega-supermarkets. She can turn a coupon into a rebate and double her money back. I grew up thinking they paid her just to schlep food away in her Volvo station wagon. At home we always had great quantities of whatever she could get cheap: macaroni-and-cheese, rocky-road ice cream, frozen egg rolls. There was a freezer in our basement large enough to house an ice sculpture of Michelangelo’s Pieta’. You get the idea.

My girlfriend’s mother, on the other hand, is of the Sicilian-Umbrian school, giving her a freezer full of frozen spinach. Not much else fits, and in Italy not much else is worth freezing. Unlike my mother, who excels in menu-globetrotting (Monday was “taco night” in our home, etc…), her mother eats Italian every day of her life.

She would not survive an hour on the East Coast of the United States. At the supermarket she stocks up on staples like onions, coffee and coarse salt. Consequently, anything in her home that carries an expiration date is probably an animal product: meat, cheese, eggs. Ignoring the scadenza could make you sick. Hence my girlfriend’s abnormal obedience to the date on the jar.

Our mothers have so far never met. And neither of them have yet figured out Skype, which is fine by us.

But the disagreement over expiration dates leads to other, more significant questions. If we are to have children, what will we teach them? That daddy doesn’t believe in expiration dates, except for meat and cheese — which, to boot, should never be eaten together — while mommy opts for throwing away even a potato with too many eyes?

Can a child reconcile such contrasting worldviews? Perhaps we should be ecumenical and teach that both views are right, as they each contributed historically to the shaping of our culture and the way we humans eat. Or that no one view has any claim to truth, and if mommy says “Don’t touch that omelet” and daddy says “It’s alright, I made it myself” both are correct — though our children might risk starvation at the hands of befuddlement.

I try to imagine what life is like in homes where couples agree over expiration dates. There is harmony, out of which good values emerge. Can an American man and an Italian woman ever agree on this most vital issue, an issue which, if improperly applied, could warp the minds of our children forever? If we can’t agree over something as paramount as the innocuousness of the food we eat should we even be contemplating bringing others into this world of unsafe victuals? Desperate for the truth, I had no choice but to turn to that fount of all trivial knowledge, the internet. Here’s a distillation of what I discovered:

1. If the word “preferably” is inscribed before the expiration date, you may eat of the foodstuffs for at least a month after the date specified.

2. But if “by” comes before the date, you must consume said foodstuffs before the date indicated. Afterwards, the food is an abomination. Your wife may divorce you for eating it.

This sounds mighty biblical. We’ll never know, of course, whether all those rules in Leviticus were simply an arcane prototype of our tidy expiration date. We know only that St. Paul opposed those laws nineteen-hundred years ago and now our household has inherited two irreconcilable ways of approaching leftovers.

My girlfriend, unable to watch as I break my head over such trifling matters, valiantly suggests a third way. “Why don’t we just agree that if something smells funny we throw it out? If not, we eat it and hope for the best.”

She must have been reading Spinoza.