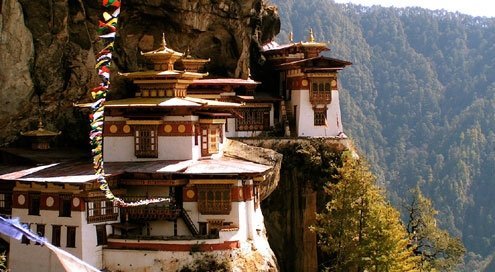 The Taktshang Monastery, also known as the "Tiger's Nest".
D

asho Adhikari is the new tech guy at the office. Dark haired and swarthy, his first few weeks he sat quietly at his desk and barely spoke a word. He rarely smiled; he barely looked up from writing code. I never saw him interact or exchange daily greetings.

Dasho’s uncommon name made me wonder where he was from. His origins might explain his placid manner. I suspected India or Nepal. So I asked him in an email: “Hi Dasho. I hope your first weeks are going well. You look like you’re really into your work. I hope this means you are enjoying it.”

He responded quickly, “Hello Madeline. I am enjoying my work, thank you. I find it very engrossing.”

“That’s great. I hope you don’t mind my curiosity,” I asked, “but with a name like Dasho Adhikari, I was wondering where are you from?”

“I’m from a small country you’ve probably never heard of. It’s so tiny most people don’t know it exists. It’s called Bhutan. Have you heard of it?”

Bhutan! Of course I knew Bhutan.

Tucked into the arms of the Himalayas between Tibet and India, it is the stuff of dreams with idyllic unspoiled mountaintops and clear rivers filled with glossy fish. Vivid in my mind was the Shangri-La Buddhist temple clinging precariously off a jagged cliff.

He was as incredulous as I was. “You know Bhutan? No one knows about Bhutan. What do you know about it?”

I recited the few facts I knew.

“I know it’s mountainous and remote, and Buddhist; they have the iconic monastery that hangs off the cliff. It was featured on a travel show recently, “‘Travels to the Edge’.”

“It looks amazing,” I replied. I’d like to go there one day.”

“Ah, you should. It’s very beautiful.”

“And of course Bhutan has the unusual idea of Gross Domestic Happiness.”

Gross Domestic Happiness is the indicator of Bhutan’s success. Where most countries focus on Gross Domestic Product as a yardstick of national progress, Bhutan’s leader demanded that simpler and more human perspective be used to measured his country: happiness. The ideal is highly lauded in select circles.

Knowing this begged the obvious question.

“So, Dasho, is everyone really happy?” I ventured.

“I guess most people are happy,” he replied plainly.

Guess? Most? That didn’t sound like a resounding endorsement.

He grew quiet before continuing.

Low expectations? Was happiness as simple as that? He was too matter of fact. All was not right in paradise. I pressed him further.

“I must admit that in the West we are a bit obsessed with this notion of happiness. I thought Bhutan had it all figured out. Are you saying in Bhutan people are not so happy after all?”

“Its getting better,” he said simply. “Right now the government keeps most of the good stuff and it doesn’t make it to the average person.”

I couldn’t believe what I was hearing.

“But things are changing,” he continued. “The people are now trying to hold the government more accountable.”

My initial excitement went somber. I was deflated. My myth dissolved before my eyes. It sounded like every other place on the planet. My expectations had been too high.

“I’ll have to talk to you about it more later,” he said. “It’s been nice talking with you but I have work to do. And simply having work, makes me happy.”