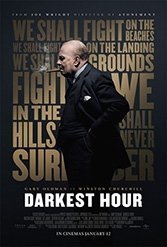 It’s one of the great movie lines. It’s May 1940, Prime Minister Winston Churchill (a masterful Gary Oldman) has just whipped the British Parliament into a defend-the-island-to-the-death frenzy. A troubled Viscount Halifax (Stephen Dillane), advocate of “peace” negotiations with Hitler’s Germany, is asked “What just happened?” “He mobilized the English language,” Halifax responds, “and sent it into battle.”

That’s not all Churchill did, of course. In that speech and others, he mobilized the nation, and at a time when the destruction of the entire British army at Dunkirk appeared imminent. But Halifax’s quip accurately describes “Darkest Hour”; it’s a film about the power of language to move the human spirit. Short on action, it’s long on speeches and talk — and long on 2017 award nominations.

One reason for high praise is that the film doesn’t get bogged down in historical detail. Churchill’s fateful decisions at Gallipoli during World War I are barely referenced. Reminders abound of former Prime Minister Neville Chamberlain’s (Ronald Pickup) insistence on negotiating with Hitler, but there’s no mention of “Munich,” the city and agreement identified with the policy of appeasement.

Instead, “Darkest Hour” focuses intensely on Churchill the person, and especially on the psychological dimensions of a series of momentous decisions: to send 4,000 young men to sure death for the chance to save 300,000; to marshal hundreds of little boats to rescue the Dunkirk stranded; to somehow hold his fractious Tory party together; and to rally the nation to fight a war that it seems destined to lose.

In this, Churchill has the guidance and succor of two women–his no-nonsense wife Clemmie (Kristen Scott Thomas) and a fetching, emotional typist (Lily James). This neophyte also is our eyes and ears as Churchill dictates and mumbles in London’s underground war rooms where much of the film is set.

Emotionally, the film turns on what may be an apocryphal moment: Churchill ventures into another underground and onto the metro in an effort to assess the willingness of the average Brit to engage in all-out war — and, perhaps, to rally himself for what he knew had to be done, a speech he had to make. The scene is cloying and overdone, to be sure, but powerful nonetheless. It’s not hard to imagine the response he got.