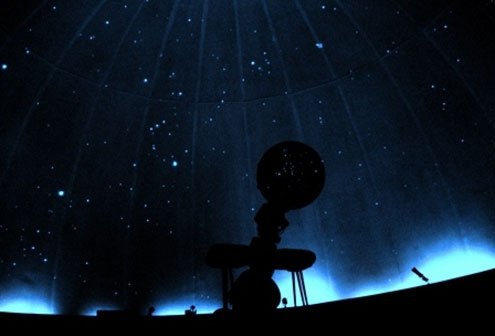 Dark does matter, but there's no tracking what comes after.
I

still remember what he wore and his stride as he walked through the lobby. His giant frame, sandy blonde hair, handsome blue eyes, the crooked smile when I handed him his torn ticket and he walked into the theater. He was alone on a Friday night. I thought he was a jock who’d come to the show to earn extra credit.

Just before it began he returned to the lobby to use the bathroom. I told him jokingly that he’d have to buy another ticket since he’d left the theater. He shook his head in embarrassment, excused himself, and headed straight for the register to buy a new ticket. His ready and humble faith in a stranger’s mean lie moved me.

I dimmed the lights to a faint red and brought up a few bright stars to quiet the crowd. “This is Jupiter Julianne, coming at you from the cosmic console here at Abrams Planetarium,” I said. “I’d like to welcome you to our show, ‘Dark Matters,’ and our tour of the local evening sky here in East Lansing, Michigan.”

At the end of the show, he came in his Birkenstocks and white t-shirt to eagerly ask me questions about the cosmological constant, Isaac Asimov and the Higgs boson. I felt guilty for having assumed he was a dumb jock. I rode by him on my bicycle as he walked home and waved to him, shouting “Goodbye, friend!” Later he’d say that that goodbye had felt too definitive, that he’d wanted to know who I was before saying goodbye to me.

On our first date, Lenny, an old friend from high school, and the boy with whom I’d gone to sophomore homecoming — someone I hadn’t seen in ages — appeared blank-eyed and drunk out of nowhere. He confronted Benjamin and announced: “If you ever hurt her, I will find you. I know where you live. I will come in your sleep and cut you down.” He would continue in this vein all night.

Later, Benjamin walked me home, but we avoided my doorstep, weaving desultory paths through town. Suddenly Lenny reappeared, this time chatting on his phone and meandering drunkenly towards us. We shouted hello. Lenny flew by me, tossing his phone in my direction and lowering his shoulder into Benjamin while shouting “I told you to be careful with her!” I looked at the phone in my hands and saw the name Marina on the screen. I tried telling Marina that Lenny was very drunk, and that, yes, I would tell him to hurry up and get to her house.

But when I turned I saw that Benjamin had Lenny, who was half his size, in a lock, trying to calm him down without hurting him. My old schoolmate was flailing and Benjamin looked at me with apologetic eyes.

Lenny eventually ran off, maybe finally intent on getting to Marina’s. Benjamin and I kept walking. By dawn we were on a silent, lamp-lit street, standing close and whispering. Again, out of nowhere came Lenny, rolling down the steep yard of the house across from us. I was reminded of the enigmatic forest in “Orlando Furioso,” in which characters constantly pursue and lose track of each other, disappearing, crossing and re-crossing paths. That marvelous forest seems to expand and contract to facilitate the odd movement that goes on inside it.

I gasped, Benjamin whipped around, and Lenny jumped to his feet. Both men yelled: “Are you following me?!” But Lenny then jogged over to us and, all the ill-will apparently forgotten, hugged Benjamin, patted him on the shoulder, and told him that I had high standards and low tolerance. If Benjamin had made it this far with me, it meant he was a good man. He then jogged away again, presumably to the long-suffering Marina.

“Were you two together in high school?” asked Benjamin. No, I told him. Lenny was an augur, someone introduced to lend weight, witness, magical coincidence, and quirky humor to the story of our first date.

When people asked us how we met, we both smiled. We didn’t know which story was better, having met under the digital stars of the planetarium, or being harassed and finally anointed by my sophomore homecoming date.

Ours was a fairy-tale beginning with an all too modern end: complex alienation. I never did get to say goodbye, a second goodbye, that is. By then, when it ended, we were too angry at each other. That may be why I remember the long shadows of that summer evening so clearly, when I biked by Benjamin’s hulking form and his long strides, when before I even knew him I said, “Goodbye, friend!”